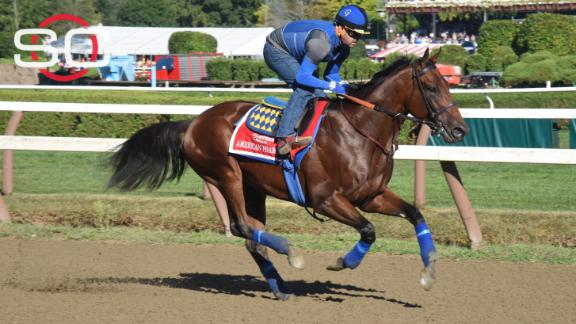 Owner Ahmed Zayat announced Thursday morning that he has decided to keep the sport's first Triple Crown champion in 37 years in training despite the shock of a second-place finish in last weekend's Travers Stakes at Saratoga.

"I have discussed all aspects of American Pharoah's race last Saturday in the Travers -- and his condition since the race -- with our whole team, and have decided American Pharoah deserves another chance, so we are pointing to the Breeders' Cup Classic," Zayat said in a statement released to ESPN.com and Daily Racing Form's Jay Privman.

In the minutes after American Pharoah suffered a stunning defeat in the Travers, Zayat, who came into the race believing his champion could win by "daylight," said his "gut feeling" over a runner-up finish behind Keen Ice was to retire American Pharoah because of a suspicion that the 3-year-old superstar was tailing off. But after conversations with everyone associated with the colt, Zayat has elected to give his champion a chance at what he called "redemption."

"I am very confident in my decision," Zayat said. "Not a moment has gone by since the race on Saturday when I have not thought about this decision. My initial concern right after the race was about American Pharoah's condition, because he did not run his 'A' race. He has come out of the race in great shape. And after examining all the evidence and talking it over with our team -- [trainer] Bob Baffert, my son Justin [racing manager for Zayat Stables], [assistant trainer] Jimmy Barnes, and [jockey] Victor Espinoza -- I believe there were a combination of factors that prevented American Pharoah from running his absolute best on Saturday. I have every confidence that he can run to his best again, and he deserves the chance to do so."

A little more than 24 hours after he galloped a mile and a quarter around Saratoga's main track in an unusually quick 2:24, American Pharoah was bitterly pressed by Belmont Stakes runner-up Frosted through demanding fractions of six furlongs in 1:11.48 and a mile in 1:35.08. In the stretch, American Pharoah drew clear of Frosted, who would finish third 2 lengths behind him, but he had little left to fend off Keen Ice in the final furlong and wound up second, just three-quarters of a length behind the winner.

"We beat the horse. It wasn't the track, it wasn't the shipping that beat him," Zayat said. "I am cursing myself for it. We were asking him to be bionic for all he went through."

Zayat said he didn't know whether American Pharoah would be given a prep race before the Breeders' Cup and that Baffert would monitor the colt's progress in the coming weeks before plans are finalized.

With American Pharoah in the mix, the $5 million Breeders' Cup Classic promises to be one of the most eagerly anticipated races in decades. In addition to the Triple Crown winner, the mile and a quarter test on Oct. 31 at Keeneland is expected to attract the two-time champion mare Beholder, who defeated males last month in the $1 million Pacific Classic; Coolmore's foreign invader Gleneagles, who has won seven of nine starts and was Europe's Cartier Champion 2-year-old male in 2014; Whitney and Metropolitan Handicap winner Honor Code; Tonalist, who captured the 2014 Belmont Stakes, denying California Chrome of a Triple Crown sweep; and Keen Ice, the 16-1 upset winner of the Spa's Midsummer Derby who was beaten by American Pharoah in their three previous meetings.

By winning at Keeneland, American Pharoah would become the first horse to achieve the newly minted Grand Slam of the Triple Crown plus the Breeders' Cup Classic.

"I am very confident that this is the right decision for American Pharoah," the 52-year-old owner said. "He loves to race. He has provided my family, racing fans and general sports fans with great thrills this year. He won the Triple Crown earlier this year, and he deserves the chance to be in the sport's premier year-end event."

Aside from attracting a sold-out crowd of 50,000 for the Travers, American Pharoah cemented his legacy as a fan favorite on the eve of the Midsummer Derby, when a crowd estimated at more than 15,000 turned out on a Friday morning at Saratoga to watch him gallop around the main track.

"I was overwhelmed by [the crowd at Friday's gallop]," Baffert said on the morning after the Travers. "It was pretty cool to see. It's amazing what he's done for racing. I know my son Bode will remember that. It was something special. Everybody in town afterward when they saw me said, 'We're sorry. We feel so bad for you, Bob, but thanks for bringing that horse.'"

Reflecting on the excitement American Pharoah brought to the historic, 147-year-old Spa, New York Racing Association vice president of racing operations Martin Panza said, "Anyone who was here [for the Travers] will remember it for the rest of their lives. The whole week was special. What happened Friday was something I had never seen in my 30 years in racing. That in and of itself is amazing."

The colt has turned those around him into celebrities, a turn of events best illustrated by Espinoza being chosen to compete this fall during the 21st season of the hit ABC show "Dancing with the Stars."

At the end of his racing career, the homebred American Pharoah will be turned over to Coolmore's Ashford Stud in Versailles, Kentucky, where he will begin a new career as a sire. Coolmore acquired the son of Pioneerof the Nile after the Preakness through a deal believed to be worth at least $20 million.

Those plans, though, are on hold for now. American Pharoah's racing career is back on track.