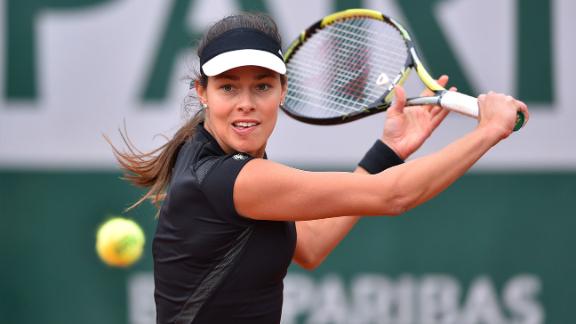 PARIS -- Former champion Ana Ivanovic returned to the quarterfinals of the French Open for the first time since her triumph at Roland Garros seven years ago after beating ninth-seeded Russian Ekaterina Makarova 7-5, 3-6, 6-1 on Sunday.

For the first time this year play was disrupted by rain, with both matches suspended for 2 hours, 40 minutes before midday, and players had to deal with gusts of wind after play resumed.

The seventh-seeded Ivanovic, who won the French Open the year after losing in the final, last made the quarterfinals of a major at the Australian Open in 2014.

"Amazing really. To be honest, coming in to the tournament I didn't expect it at all," Ivanovic said. "But I really worked hard for each match. I worked hard even before the tournament to reach the quarterfinal again here. I'm very proud of the way I played in the third set."

Playing on court Suzanne Lenglen, Ivanovic made up for her lack of consistency in the second set with an aggressive display in the decider and closed out the match with a big forehand, her 30th winner of the match.

The nervous Cornet was off to a bad start in her fourth-round match against Svitolina on center court, trailing 3-0 after dropping her serve twice when their match was suspended after 21 minutes. The rain gave her the chance to refocus in the locker room but she lost the first six points when play resumed.

In a match featuring 12 breaks of serves, Cornet did not go down without a fight and saved five match points before a final backhand out of bounds sealed her fate.

The 29th-seeded Frenchwoman lost her temper near the end, remonstrating with the umpire over a shot that was called out in the 11th game of the second set after Svitolina stopped the rally. Svitolina said afterward she thought "99 percent the ball was out."

Cornet complained to the umpire at the changeover, saying "you look in my eyes and you know it" was in. She also dared the umpire to "give me a warning after you stole me a point."

The two remaining women's fourth-round matches on Sunday's schedule were postponed because of the rain delay, meaning defending champion Maria Sharapova will wait until Monday before playing 13th-seeded Lucie Safavrova. Tournament organizers also postponed the match between No. 21 Garbine Muguruza vs. No. 28 Flavia Pennetta.