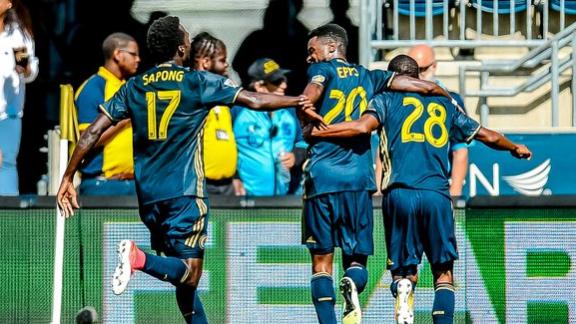 Roland Alberg scored in the 88th minute and Andre Blake had his ninth shutout of the season as the Philadelphia Union beat the Seattle Sounders 2-0 on Sunday.

Philadelphia won for just the second time in nine games to keep its slim playoff chances alive. Seattle needed a win to clinch its ninth straight playoff spot. The Sounders have two home games remaining against FC Dallas and Colorado.

Rookie Marcus Epps opened the scoring in the 28th minute. He settled Ilsinho's pass with his right foot, took a touch and sent a left-footed shot inside the near post from the corner of the six-yard box.

Jay Simpson's open header in the 87th was saved by Seattle goalkeeper Stefan Frei. Moments later, Alberg received a short corner kick from Simpson, dribbled out of a double team and sent in a shot from the edge of the 18-yard box.

Second-half sub Clint Dempsey gave Seattle some energy on offense and had a shot knocked out of bounds by Blake in the 62nd minute before his open volley in the five minutes later sailed over the crossbar.

Will Bruin's curling shot in the 81st forced a full-stretch save by Blake.