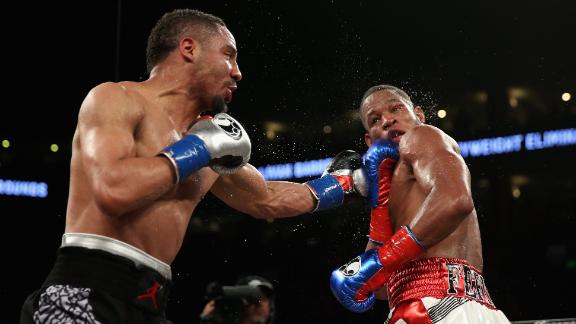 With Golden State Warriors superstar Stephen Curry and other Bay Area sports stars at ringside among the crowd of 8,532, Ward put on a clinic against Barrera, scoring a third-round knockdown and winning a lopsided unanimous decision to pound his way toward a fall date with unified titleholder Sergey Kovalev, who watched with great interest from ringside.

Ward, whose 175-pound debut was delayed in November because of swelling in his right knee, was fighting for the first time in nine months and for just the fourth time since December 2011, when he easily outpointed Carl Froch to unify two 168-pound titles and win the Super Six World Boxing Classic.

A lengthy -- and losing -- battle over his contract with his late former promoter, Dan Goossen, as well as knee and shoulder injuries kept Ward out of the ring for long stretches. But when he does fight, he is clearly one of the best boxers in the world.

After Ward dominated every bout of the Super Six tournament, including one-sided wins against Froch, Mikkel Kessler and Arthur Abraham, many viewed him as the best fighter in the world not named Floyd Mayweather. His status took a hit only because of the inactivity.

Now signed to Jay Z's Roc Nation Sports, Ward is on his way to a huge fight against Kovalev, the Russian destroyer who owns three title belts and one of the biggest punches in the sport.

A 2004 Olympic gold medalist, Ward has not lost a fight since he was a 12-year-old amateur. He said he is looking forward to the much-anticipated fight with Kovalev, which some regard as a bout that will determine the No.1 fighter in the world pound-for-pound.

Ward already has a contract in place to face Kovalev, with Nov. 19 the target date on HBO PPV.

"It's never a problem. You look at my track record," Ward said about whether he would fight Kovalev. "I want to fight the best. I've always fought the best. Sergey Kovalev, he's a great champion."

Barrera, 34, a former Cuban amateur standout who defected and now is based in Miami, already had punched his way into a mandatory fight with Main Events stablemate Kovalev, but with that fight not likely to happen in the near future, he aggressively called out Ward and got his wish.

Barrera might regret it, though, after the way Ward took him apart.

Ward, not known for his power and fighting a much bigger man Saturday, landed a hard, short left hook to the top of Barrera's head in the third round that sent Barrera to the mat on his rear end. Throughout the bout, Ward (29-0, 15 KOs) landed clean left hooks and stinging jabs while Barrera (17-1, 12 KOs) mounted little offense.

In the eighth round, Ward landed a powerful left hook to the body that dropped Barrera, but the shot strayed a tad low, and referee Raul Caiz Sr. called it a low blow and deducted a point from Ward.

An accidental head butt in the 10th round opened a cut over Ward's left eye, and although he bled some, Ward handled it well. He was in total control and even rocked Barrera with a right hand with a minute left in the 12th round.

Even with the one-sided victory, Ward was a bit hard on himself.

"Probably a B-minus, because I told you I wouldn't use the layoff as an excuse on any level, but the reality is, the more you fight, the sharper you get," Ward said. "There were certain things I wanted to do I didn't do tonight.

"[I wanted to] get my punches off a little bit more. If we could've got the right shots in, we could've stopped him. Just things like that. Getting off more combinations and even defensively tightening things up."

With Ward's dismissal of Barrera, the drumbeat will continue for the Kovalev showdown. Kovalev (29-0-1, 26 KOs), 32, is planning to fight in June against an opponent to be determined, possibly in Russia, and there is also a chance that Ward might fight once more before they meet.

"He's the man at light heavyweight," Ward said of Kovalev. "It's not a matter of if. I just think it's when. We'll let my team work that out."

Kovalev said he was happy but not surprised to see Ward win impressively.

"My prediction is complete," Kovalev said. "[I said] that it would be easy for Ward. I felt that he would stop Barrera early. But Barrera did better than I expected. I am very happy that he won and it takes me one more step to our possible fight. It's possible because we have to win one fight more, than after that our fight.

"I understand that most people don't love me here (in Oakland) because I want to beat him in front of his fans. He looked very good, but I know that he can look much better. He did not show his entire arsenal because he was out for so long. It will be an interesting fight when we meet."

Featherweight prospect Joseph Diaz Jr. took a big step up in competition and looked good doing it, dominating former world title challenger Jayson Velez, with whom he had once sparred, in a lopsided 10-round decision win in the co-feature.

Diaz (20-0, 11 KOs), 23, a 2012 U.S. Olympian from South El Monte, California, suffered a small cut under his right eye from a clean punch Velez landed at the end of the first round and also suffered a cut over his right eye in the eighth round. Still, he was the clear winner against Velez (23-2-1, 16 KOs), 28, of Puerto Rico, who lost his second fight in a row and dropped to 0-2-1 in his last three bouts, the draw coming against then-featherweight world titleholder Evgeny Gradovich in November 2014.

Diaz's left hand was impressive. He landed it with authority throughout the fight and also mixed in powerful right hands to the body. He rocked Velez with two lefts in the second round and wobbled him several times during the fight. But Velez showed a big heart and a tremendous chin as he took all of the shots and never stopped coming forward and trying to win.

"I feel great," Diaz said. "I knew Jayson was going to be a warrior in the ring and was going to be at 110 percent in the ring, and that is what he did tonight. I was very well prepared for him. I was in better shape, and I landed the most effective blows and combinations.

"I am happy to be in Oakland making my HBO debut, and I think that we put on a great performance for all the fans."

Said Velez: "He was tough, tougher than I thought he was going to be. I thought that I was going to finish him in the fifth or sixth round, but unfortunately, that wasn't the result tonight. I am glad we delivered a great fight, a great performance from both of us."