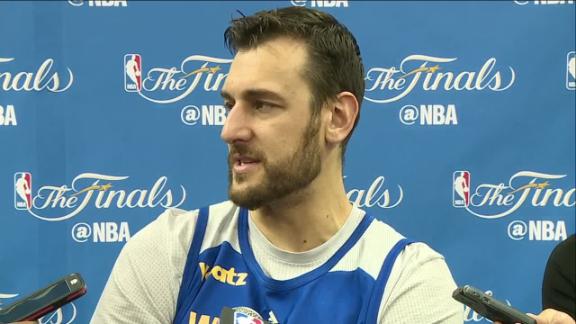 CLEVELAND --Golden State Warriors center Andrew Bogut had a terrible ordeal with a concussion earlier this season and it left him with some strong opinions about the process Cleveland Cavaliers forward Kevin Love is currently going through as he recovers from one.

Bogut missed two weeks in October and November after suffering a blow to the head in the season opener. His fiancée said his personality changed. He called it the worst injury of his career, and that includes the gruesome fall in 2010 that dislocated his elbow, broke his hand and sprained his wrist.

Love missed Game 3 of the NBA Finals on Wednesday because he still was in the concussion protocol. Teammates said Love, who took an elbow to the head in Game 2, was extremely frustrated he couldn't play. Bogut offered support having been there.

"There's probably people calling Kevin Love soft and those people are idiots," Bogut said. "You don't mess around with the brain."

Bogut said he's sure Love is frustrated because the testing is tedious. Bogut claims that in 2012 he didn't pass concussion tests because of a slow Wi-Fi connection, and he was held out of a game as a result. When he retook the test on a wired internet line, he passed.

But Bogut said the protocol is in place for a reason and sometimes that can protect the player and the team from themselves.