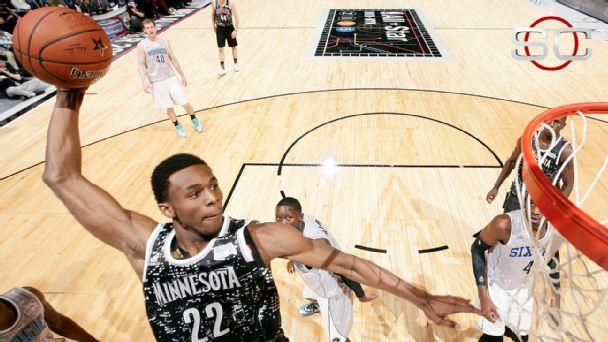 Wiggins, the No. 1 pick from Canada who plays for Minnesota, was chosen as the game's MVP.

Brooklyn's Bojan Bogdanovic of Croatia, playing on his home court, and Chicago's Nikola Mirotic from Montenegro each added 16 points for the World.

Orlando's Victor Oladipo and Zach LaVine of Minnesota each scored 22 points for the U.S. team in the game between rookies and second-year players.

It was another new format for the opening game of All-Star weekend, which originated as a contest between teams of rookies, later turned into rookies against second-year players, and this year changed to the world against U.S. players.

It looked like all the other versions, with lots of 1-on-1 play and little defense beyond Gobert, the French center who impressively stuffed Nets center Mason Plumlee late in the game with the World protecting a narrow lead.

Some of the dunks were impressive -- all four contestants in Saturday's slam dunk contest were in Friday's game -- but the play was spotty. Oladipo shot 8 for 21 and the teams combined for 51 turnovers.

Minnesota's Gorgui Dieng of Senegal finished with 14 points and Milwaukee's Giannis Antetokounmpo of Greece had 12 points and 10 rebounds for the World. He's in the dunk contest Saturday along with LaVine, Oladipo and Plumlee.

Utah's Trey Burke scored 17 points for the U.S. and Plumlee had 13 points and nine rebounds. 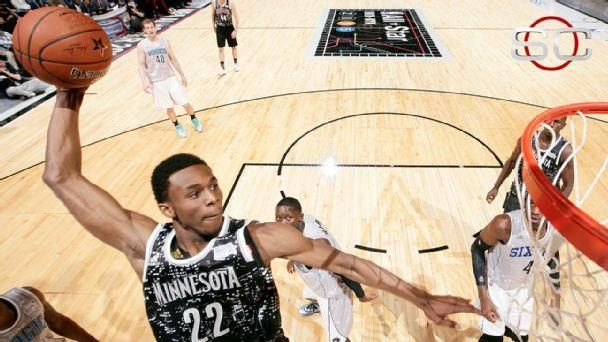