Arnold Palmer dies at 87 of complications from heart problems 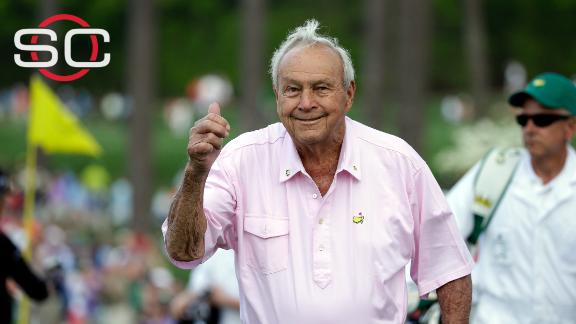 "I'm just so heartbroken about it," Giffin said. "As much as Arnold Palmer meant to the world, he meant that much and more to me."

According to his longtime agent, Alastair Johnston, Palmer died of complications from heart problems. Johnston said Palmer was admitted to the University of Pittsburgh Medical Center Presbyterian on Thursday for some cardiovascular work and weakened over the past few days.

Palmer, who was nicknamed "The King," won seven major championships during his professional career, which spanned more than five decades. He won the Masters four times, The Open twice and the U.S. Open once.

"We are deeply saddened by the death of Arnold Palmer, golf's greatest ambassador," the United States Golf Association said in a statement. "Arnold Palmer will always be a champion, in every sense of the word. He inspired generations to love golf by sharing his competitive spirit, displaying sportsmanship, caring for golfers and golf fans and serving as a lifelong ambassador for the sport.

"Our stories of him not only fill the pages of golf's history books and the walls of the museum but also our own personal golf memories. The game is indeed better because of him and, in so many ways, will never be the same."

Palmer was born Sept. 10, 1929, in Latrobe, Pennsylvania, the oldest of four children. His father, Deacon, became the greenskeeper at Latrobe Country Club in 1921 and the club pro in 1933.

Palmer began his professional career in 1954. He quickly picked up his first PGA Tour win at the 1955 Canadian Open in his rookie season, and his first-round 64 remained the best opening round of his career.

He went on to win 62 titles on the PGA Tour, fifth-most all time, and 92 including international and senior victories. He was PGA Player of the Year twice (1960 and '62) and the tour's leading money winner four times, with total tournament earnings of almost $7 million.

Beyond golf, Palmer was a pioneer in sports marketing, and he paved the way for scores of other athletes to reap millions from endorsements. Some four decades after his final PGA Tour win, Palmer ranked among the highest earners in golf.

Palmer played at least one PGA Tour event every season for 52 consecutive years, ending with the 2004 Masters. He spearheaded the growth of the 50-and-older Champions Tour, winning 10 times and drawing some of the biggest crowds.

He was equally successful off the greens with golf course design, a wine collection and apparel that included his famous logo of an umbrella. He bought the Bay Hill Club & Lodge upon making his winter home in Orlando, Florida, and in 2007, the PGA Tour changed the name of the tournament to the Arnold Palmer Invitational.

"We were blessed that Arnold Palmer chose golf as a profession," PGA of America president Derek Sprague said.

Added U.S. Ryder Cup captain Davis Love III: "When I think of Arnold Palmer, I think of his natural ability to relate to people, the close bond he had with his father and how, when I first came on tour, he made young professionals like me feel welcome. ... He leaves an impact on the game and on sports in America that is unmatched."

Palmer won the Masters in 1958, 1960, 1962 and 1964 and is one of two champions -- along with Jack Nicklaus -- who are members of Augusta National. Nicklaus (six) and Tiger Woods (four) are the only golfers who have won as many Masters titles.

Nicklaus said he last spoke to Palmer on his birthday, Sept. 10, and that Palmer "sounded great."

"It's hard to believe that Arnold has passed, and I'm deeply saddened by his loss," Woods said in a statement. "He meant so much to the game and to me personally. I knew that I could always call him for advice, and I looked forward to seeing him at Bay Hill and the Masters. Arnold touched so many people. My kids were born at the Winnie Palmer Hospital for Women & Babies, and his philanthropic work will be remembered along with his accomplishments in golf. It was an honor and privilege to have known Arnold, and I'm forever grateful for his friendship."

Palmer developed a rivalry and lifelong friendship with Nicklaus and Gary Player, and the trio eventually became known as the Big Three. Among them, they won seven straight Masters titles from 1960 to 1966, and they hit ceremonial tee shots together at Augusta National to signal the start of the year's first major. Palmer hit his first ceremonial tee shot at Augusta in 2007. Nicklaus joined him in 2010, and Player was added in 2012.

Palmer slowed down in 2016 and was unable to hit his ceremonial Masters tee shot, though he did take part in the ceremony. He also did not hold his traditional pre-tournament news conference for his own event at Bay Hill.

Palmer's first Masters victory in 1958 was the first year soldiers from Camp Gordon were offered free admission at Augusta and helped run the scoreboards. Palmer, with his charisma, won over the soldiers and just about everyone else, and "Arnie's Army" took root.

Perhaps his greatest victory came at Colorado's Cherry Hills Country Club in 1960, when he won his only U.S. Open title. Trailing by 7 shots entering the final round, Palmer birdied six of the first seven holes en route to a final-round 65. At the time, it represented the lowest final-round score by a U.S. Open champion, and it remains the largest 54-hole deficit overcome to win the tournament, according to ESPN Stats & Information. Palmer lost three U.S. Opens in a playoff, the most playoff losses in U.S. Open history.

It was Palmer who gave golf the modern version of the Grand Slam: winning all four professional majors in one year. He came up with the idea after he won the Masters and U.S. Open in 1960. Palmer was runner-up at The Open, which he later called one of the biggest disappointments of his career. But his appearance alone invigorated the event, which Americans had been ignoring for years.

The Royal & Ancient, which organizes The Open, paid tribute to Palmer, with R&A CEO Martin Slumbers saying the golfing legend "will be missed and forever remembered by all at The R&A and throughout the world of golf as a charismatic and global champion of our game."

Palmer never won the PGA Championship, and so he finished one major short of capturing a career Grand Slam. But the standard he set went beyond trophies. It was the way he treated people, looking everyone in the eye with a smile and a wink. He signed every autograph and made sure it was legible. He made every fan feel like an old friend.

"I've respected a number of players who came before me, but Arnold Palmer was my model on and off the course," said Phil Mickelson. "I'm saddened by his death, but I'm a better player and perhaps a better person thanks to his example."

For nongolf fans, Palmer might be best known for the drink named after him after he ordered his favorite concoction of iced tea and lemonade at a restaurant. A woman overheard him and said she would have the same thing, and the "Arnold Palmer" was born.

Said Nicklaus: "Arnold transcended the game of golf. He was more than a golfer or even great golfer. He was an icon. He was a legend. Arnold was someone who was a pioneer in his sport. He took the game from one level to a higher level, virtually by himself. ... We were great competitors who loved competing against each other, but we were always great friends along the way. Arnold always had my back, and I had his. We were always there for each other. That never changed.

"He was the king of our sport and always will be."

Palmer is predeceased by his first wife, Winnie, and survived by his second wife, Kit; his daughters, Amy (Roy) Saunders and Peggy (Stewart) Bryan; six grandchildren; numerous great-grandchildren; his brother, Jerry; and his sisters, Sandra Sarni and Lois "Cheech" Tilly.

Details on a memorial service and burial will be announced later. 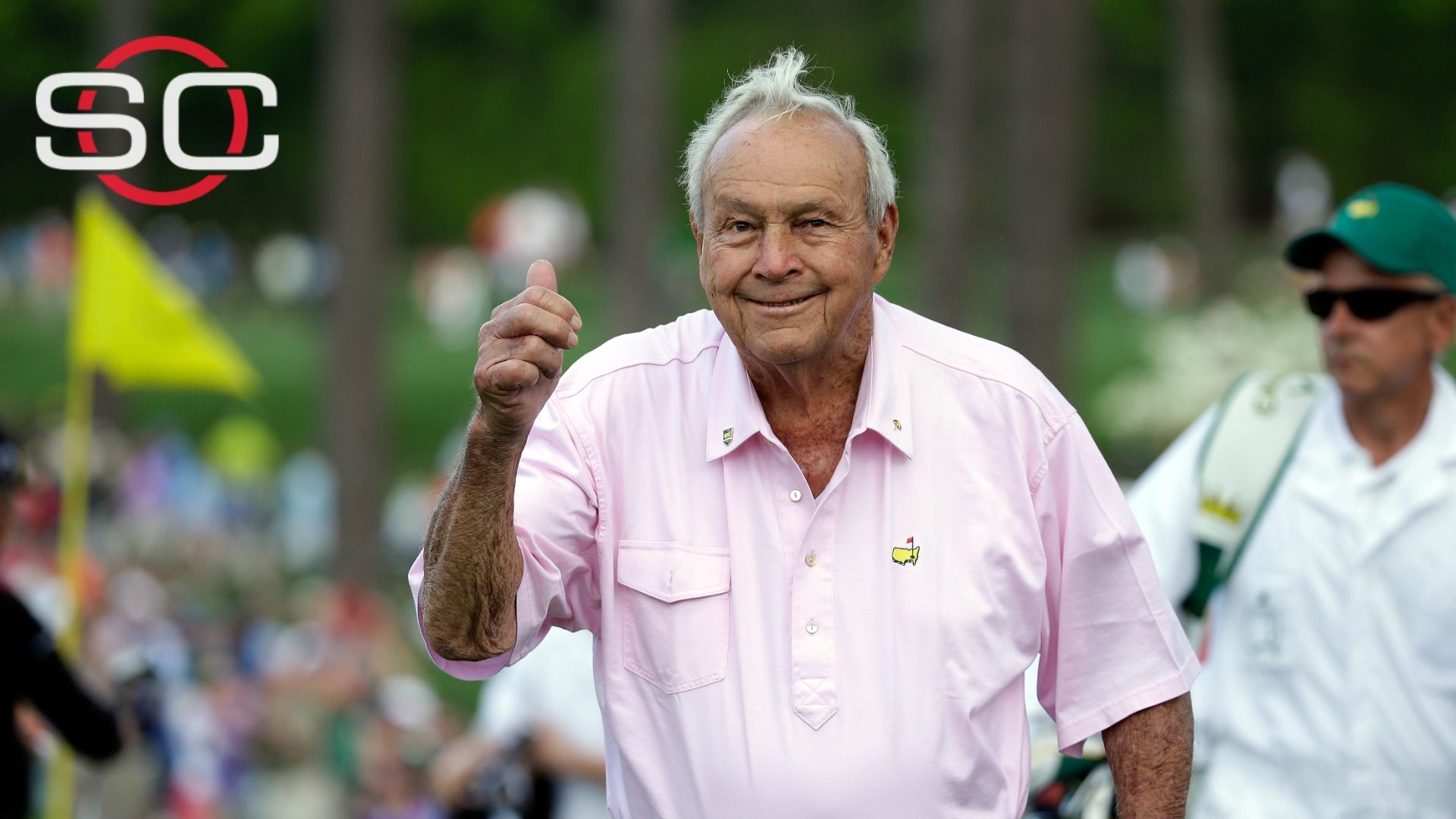 North: Palmer was an icon who was bigger than the game
ESPN golf analyst Andy North talks about Arnold Palmer's significance and reflects on his legacy, saying Palmer was one of the icons of the sports world. 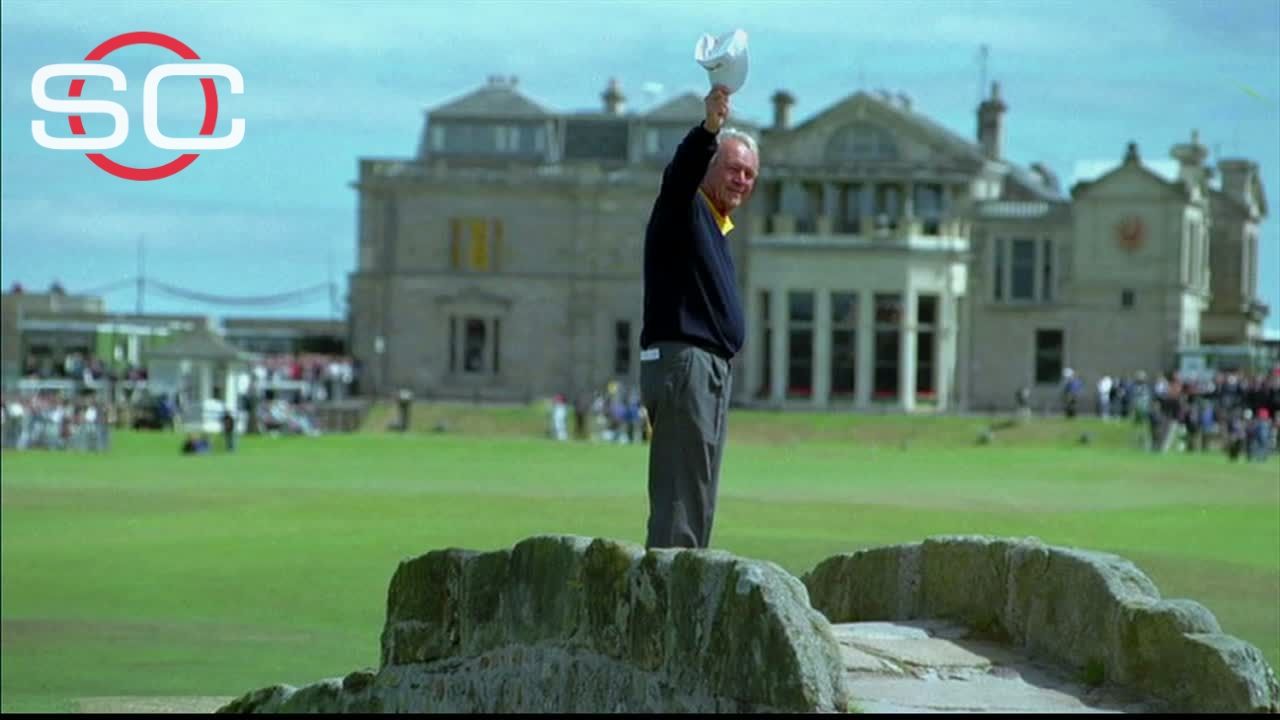 Palmer simply the most important golfer of all time
Tom Rinaldi reflects on the life and legacy of Arnold Palmer, who has died at the age of 87.

Palmer did so much to bring golf to the masses
ESPN senior golf writer Bob Harig points out that golf wouldn't be anywhere close to where it is today without Arnold Palmer and the way he could bring the support of the masses behind him to the sport. 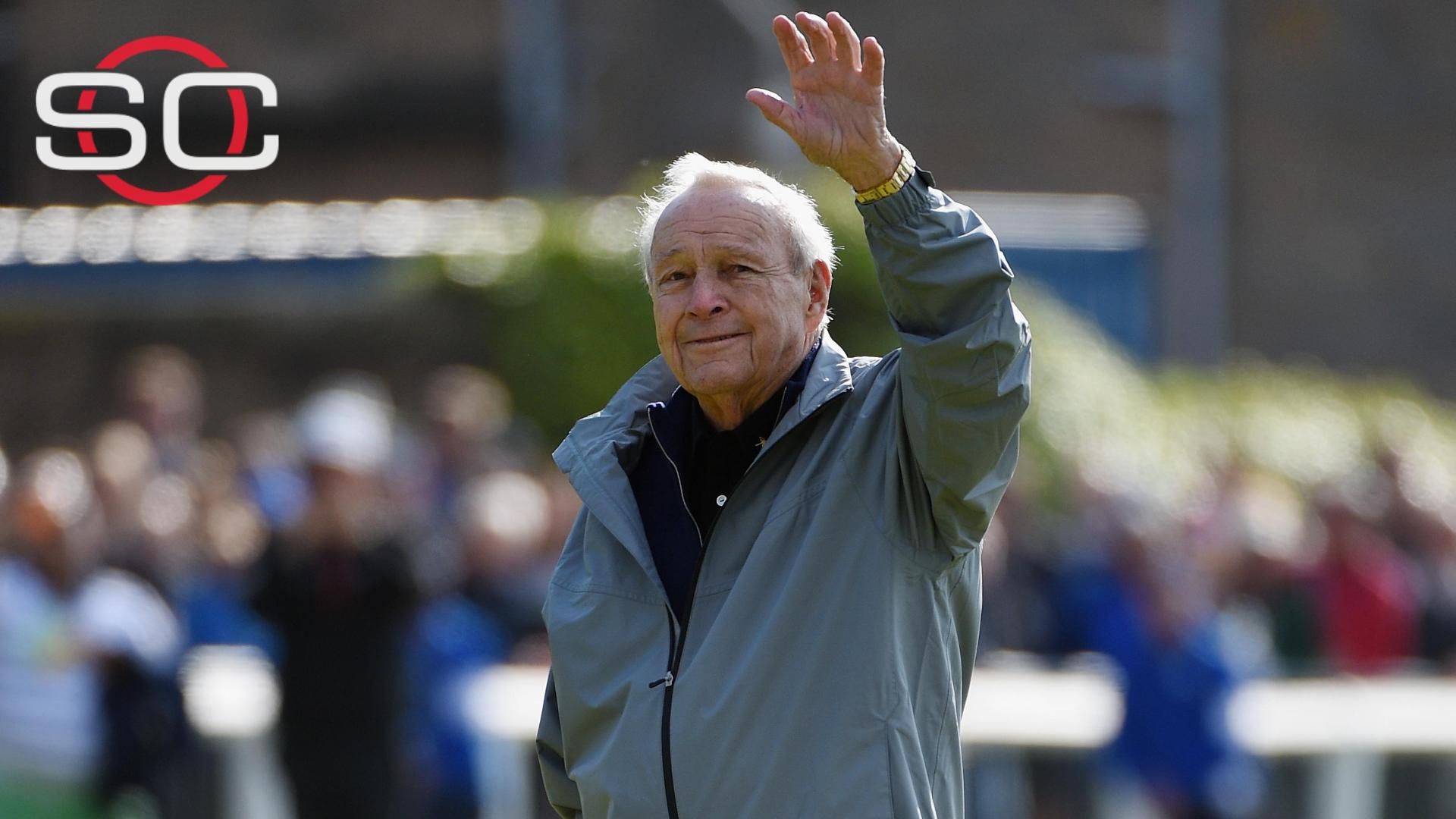 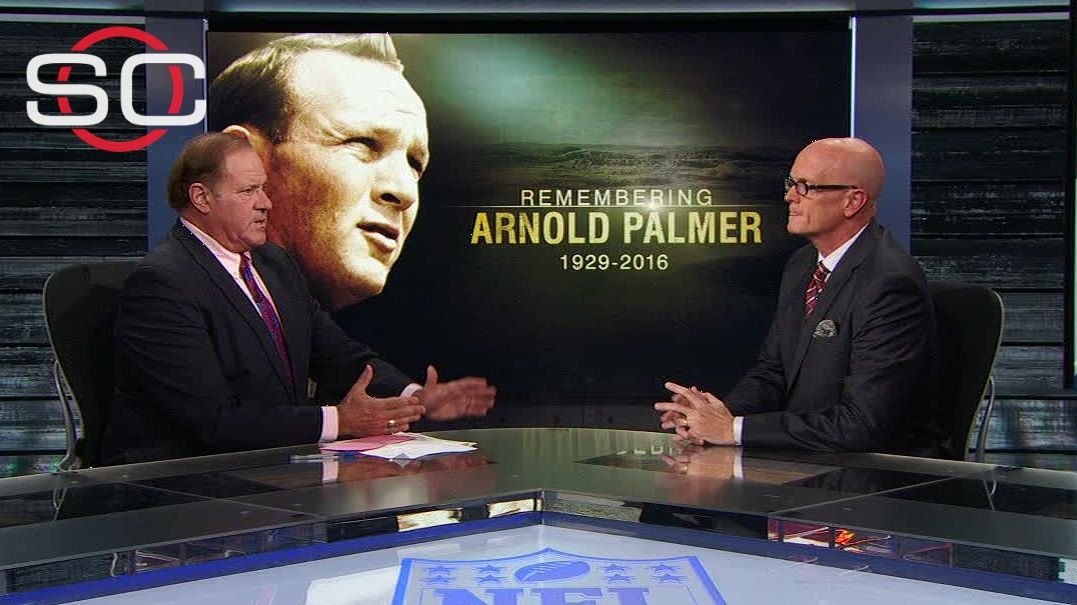 SVP and Berman remember Arnold Palmer
Scott Van Pelt and Chris Berman reflect on their memories of Arnold Palmer, who has died at the age of 87. 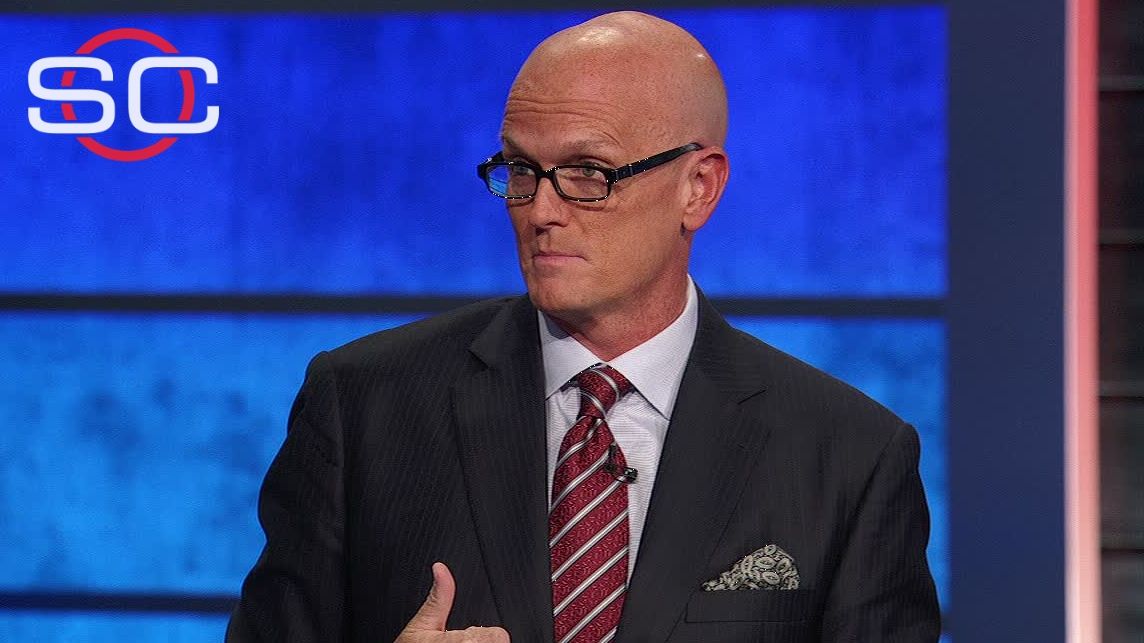 SVP shares a personal story about Arnold Palmer
Scott Van Pelt recalls how he greeted Arnold Palmer, once with the Golf Channel and another time at ESPN, in the same fashion. The second time around, he remembers that Palmer said to him, "I knew you when you had hair."