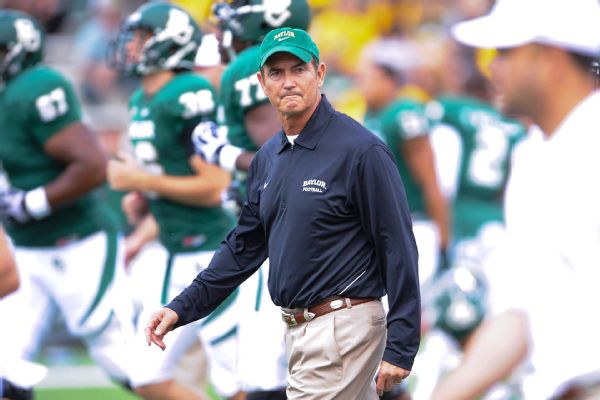 The lawsuit also asserts that Baylor officials conspired to damage his reputation and keep him from getting another coaching job. The lawsuit additionally seeks damages for emotional distress and likely ending his career as a coach "on any level."

"Some people think themselves above the law, but the laws of Texas establish accountability for everyone, even renegade, self-dealing regents of a Christian university," Briles' lawsuit states.

"I'd like to hear these regents and Mr. Ramsower tell their story under oath in broad daylight and open court,'' Cannon told The Associated Press.

Briles was fired last May after an investigation determined Baylor mishandled reports of alleged sexual and physical assaults, some by football players.

The lawsuit accuses the regents and Ramsower of spreading false information through media interviews with Texas and national outlets on the advice of a recently hired media relations firm, G.F. Bunting + Co., which was not named as a defendant.

Those figures had never been disclosed to Briles when he was fired or during his settlement after he sued for wrongful termination, according to Briles' lawsuit.

Briles argues that releasing those figures was intended to falsely portray him as hiding knowledge of alleged attacks. Allegations that he knew about and failed to report the alleged attacks are "false" and were created to "expose Coach Briles to public hatred, contempt, ridicule and cause him financial injury," the lawsuit says.

The allegations have prevented Briles, who had built Baylor into a Big 12 and national power, from getting another coaching job, the lawsuit states.

"These defendants have been relentless in their false attacks upon Coach Briles in the media despite his repeated requests they cease and retract their onslaught of untruths," the lawsuit said.

Briles' name has been rumored for several jobs, but he has not received an offer. Earlier this week, his name surfaced as a candidate for the vacancy at Houston, but school officials there put out a statement that he would not be interviewed.

Briles' lawsuit is the latest development in a scandal that has rocked the nation's largest Baptist university.

An investigation by the law firm Pepper Hamilton earlier this year found that the school mishandled assault claims for years. Briles was fired, school president Ken Starr was demoted and eventually left, and athletic director Ian McCaw resigned. McCaw was recently hired as AD at Liberty University in Virginia.

The school is facing several federal lawsuits by women who say the university ignored or tried to suppress its claims of sexual and physical assault.

Several of Baylor's most prominent financial donors, including Drayton McLane and John Eddie Williams, whose names adorn Baylor's new $266 million football stadium and field, respectively, have questioned the integrity of the Pepper Hamilton report and the actions of the board of regents. McLane has said he wants to see Briles' "honor restored."

The Briles lawsuit notes the Pepper Hamilton report said the university failed to set up proper investigation procedures. Regents are now trying to hide their failures by scapegoating Briles, the lawsuit says.

"By their actions, the [Baylor officials] are allowing the alleged rapists and assaulters to walk free, thereby confirming that they are more interested in ruining Coach Briles' name, reputation and career than they are bringing criminals to justice," the lawsuit says.