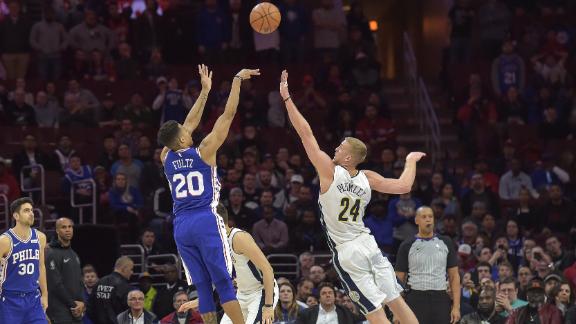 Australian Jonah Bolden says he's playing some of the best basketball of his life after joining Israeli powerhouse Maccabi Tel-Aviv earlier this season. Bolden, who was drafted by the 76ers in last year's NBA draft, is happy with the growth of his all-round game in Europe.

"I think it's probably my best year of just progression," Bolden tells ESPN. "I mean, last year I got to showcase all my skill-set, I think this year, going off of last year, I kind of stepped up a little bit."

Bolden returned to Europe not long after NBA Summer League at the behest of the 76ers who felt his game needed a little extra seasoning before coming to the NBA; the Australian and Maccabi reaching an agreement to buy out the remainder of his contract from Red Star Belgrade. Since joining the Israeli team, Bolden has been averaging 8.4 points per game, 7.1 rebounds and 1.5 assists per game across 17 Israeli League matches, and 6.8 points, 5.5 rebounds and 1.6 assists in 27 appearances in the much tougher EuroLeague competition.

There was a slight adjustment period in the step up in quality from the Serbian league where Bolden had previously played, but after that initial speed bump, he says both he and the team have found their rhythm.

"In the beginning it was kind of slow, a lot of the team was [kind of] new so we were getting a feel for each other," he says. "Once all that came together, we got chemistry and I found my niche within the team. I just tried to do a snowball effect and go from there and I think at this point right now, I wouldn't say I'm playing the best basketball I've ever played, but I'm playing pretty good."

With just a couple of games left, Maccabi will not qualify for EuroLeague playoff action this season. Bolden will instead resume play in the Israeli League, but with an eye focused firmly on what the future may hold for him in Philadelphia. The 76ers, and in particular team president Bryan Colangelo, have kept the lines of communication open, with Colangelo having made a trip to Tel-Aviv late last year to monitor the progress his draft pick has been making.

"I spent some time with him in December, I had a chance to go see him and I saw a couple of basketball games," Colangelo told ESPN. "[I] got a real good feel of what he's going though and how he's playing for them; how he's fitting into their program. [Maccabi] were all unanimously favourable in their comments and consideration of him."

Bolden says it's been encouraging that Colangelo has stayed in touch while he's been in Israel.

Fortunately for Bolden, the coaching staff in Israel have been utilizing him at the power forward position - a spot he will likely fill in the NBA as well - which has allowed him to showcase his talents: catch-and-shoot, grabbing rebounds and initiating fast break opportunities, and playing defense. Colangelo says he doesn't want to box Bolden in as strictly a four man, but added that he loves the Australian's versatility.

"He's just refining some of the skillset we like so much," Colangelo tells ESPN. "We love his versatility; his ability to grab-and-go in transition; he's getting better at making good decisions and controlling the ball. I love what he does defensively, he's got great instincts defensively. He's a multi-position player, which is phenomenal in the modern day game that we play.

"His ability to step outside and shoot the ball really does make him a modern big. Again, I don't want to position him as a four - he can play some three, he can play some five - I just love the versatility that he brings."

The upstart 76ers have performed above expectations this season. They currently occupy the fourth seed in the Eastern Conference standings with a 43-30 record, and head coach Brett Brown is maximizing the unique talents of his stars Joel Embiid and Ben Simmons by employing a free-flowing offensive system. Bolden, who watches as many Sixers games as he can from Israel, says he's been impressed with what he's seen from the team this season.

Bolden envisioned playing in the NBA from a young age; with the reality of playing with the 76ers edging ever closer, as well as what he may also add to the team, he's allowing himself to dream of playing alongside the likes of fellow countryman Simmons and All-Star Embiid.

"I feel like I'm only scratching the surface, I feel like I could do so much more with what I'm doing," he says.

76ers victorious in Fultz's return
In his first game since October, the No. 1 overall pick Markelle Fultz checked back in to score 10 points and dish out eight assists to help the Sixers to a 123-104 win over the Nuggets.