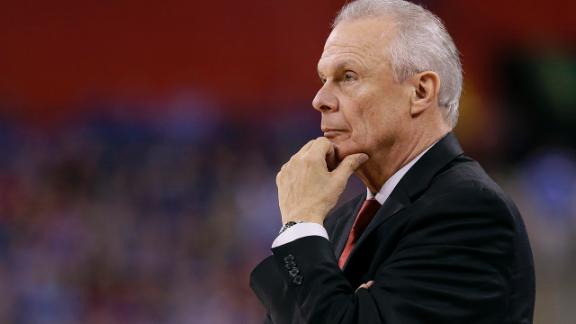 Longtime Wisconsin Badgers coach Bo Ryan still hasn't decided if he will retire after the 2015-16 season despiteoriginally making that declaration in June.

Ryan, reiterating what he said at a charity event Wednesday night in Kaukauna, Wisconsin, told ESPN on Thursday that he will take the next few months to decide after returning from vacation.

"I will know in the next few months now that I've stepped back into it after vacation,'' Ryan said by phone. "The reason I did that with [Wisconsin athletic director] Barry [Alvarez] was so he would know my intentions. Barry went through the same thing when he stopped coaching [football] and went to the AD position.''

Ryan, who has a five-year contract at the school, said he hasn't signed any retirement papers and that he won't re-sign prior to or during the season. He also wouldn't rule out coaching beyond next season.

The Badgers are coming off back-to-back Final Four appearances, including a national title loss to Duke in Indianapolis in April after Wisconsin ended Kentucky's perfect season in the national semifinal.

Ryan, 67, was nominated for the Naismith Basketball Hall of Fame but didn't get selected for induction. He is 357-125 in 14 seasons at Wisconsin, reaching the NCAA tournament every March. Ryan won four national championships at Division III Wisconsin-Platteville.

"People were chanting: 'Four more years! Four more years!''' Ryan said of the charity event Wednesday. "Barry left it open-ended for me. I had to do something [in June]. You can't look recruits' parents in the face and guarantee them four more years. Kids can't guarantee you four years, either.

"We were having fun [Wednesday night]. It's one of those things that no matter where I go, it will be talked about. I'll have to sit down one of these days and decide one way or another.''

On Wednesday night, Ryan told reporters that he was rethinking his plans.

"I am," Ryan said. "Everybody kind of thinks they know when they're ready to retire, or step aside. I'm not totally sure. ... I just wanted to get it out there that I'm not going to be able to do this forever. But who can say one year? Who can say that? I simply cut to the chase by saying I'll do another year and we'll see what happens in the next number of months."

Ryan told ESPN on Thursday that the Badgers have only one scholarship for 2016, so recruiting isn't as pressing an issue. But it will become one for the class of 2017 and 2018.

"I just sell Wisconsin, the university and our program,'' Ryan said. "Obviously, I would like to see Greg Gard (his longtime associate head coach) get the position. That's what corporations do -- the second-in-command steps up.''

Ryan acknowledged that there are examples of assistants who weren't head coaches who landed big-time jobs at their school -- such as Tom Izzo (Michigan State), Jamie Dixon (Pittsburgh) and Mark Few (Gonzaga).

Ryan even offered up Alvarez, who was an assistant at Notre Dame before getting the head coaching job at Wisconsin, as an example.

"There are a lot of guys in successful programs who have had a chance to move up,'' Ryan said. "What I'm going to do is work as hard as I can to get this team -- our youngest team I've ever had -- to buy into what we're doing.''