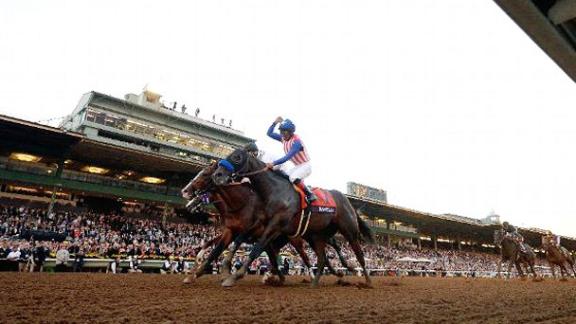 ARCADIA, Calif. -- The Breeders' Cup Classic began like a demolition derby, with horses crashing into each other out of the starting gate. It ended with Hall of Fame trainer Bob Baffert winning North America's richest race for the first time.

Baffert had to sweat it out, along with a crowd of 61,114 at Santa Anita, while the stewards sorted out the chaos. Their surprising decision not to disqualify anyone is something fans will be debating for some time.

After several agonizing minutes, Bayern stood as the winner of the $5 million race by a nose Saturday, ending Baffert's 0-for-12 skid.

"It's been so long waiting, I was like, 'Lord, you can't take it away from me now,'" said Baffert, who has won just about every other big race in the sport, including three Kentucky Derbies. "I couldn't breathe the last 20 yards."

Not everyone agreed with the outcome.

Shared Belief, the 5-2 favorite co-owned by sports talk host Jim Rome, was knocked off his game at the start by Bayern and finished fourth, ending his undefeated streak at seven.

"I think it cost me the race," Hall of Fame jockey Mike Smith said of the early tangle. "I was never able to get comfortable after getting hit at the break."

"To be here and enjoy the week like we did and walk away with three winners is a dream come true," said Brown, who is based in New York.

The Mile surprise was one of four upsets Saturday. The biggest came in the $2 million Juvenile Fillies, with Take Charge Brandi kicking off the nine Cup races with a 61-1 upset for 79-year-old Hall of Fame trainer D. Wayne Lukas.

Smith extended his record for Cup victories to 21 with a win in the Filly & Mare Sprint with Judy the Beauty -- the only favorite to win Saturday.

Toast of New York returned $18 and $10.80. Kentucky Derby and Preakness winner California Chrome was another neck back in third and paid $5.40 to show.

The inquiry involved the first four finishers, with their numbers flashing for several minutes on the toteboard as the video was reviewed.

Scott Chaney, one of the track's three stewards, said in a statement that after talking to the patrol judges and riders involved, the stewards unanimously decided the bumping didn't affect the outcome. They ruled that because it occurred early in the race, the affected horses still had a chance to run.

The start of the race was a wild one, with some of the horses in the full field of 14 bouncing into each other like bumper cars at the county fair.

Luckily, no one appeared to get hurt.

Bayern, with Martin Garcia aboard, came over sharply on Shared Belief out of the starting gate. That forced Shared Belief into Moreno, with Travers winner V.E. Day getting squeezed.

"Mike said he got hit really hard and that slowed him down, then the whole field came over on him and Moreno was getting out on him," said Alex Solis II, co-owner of Shared Belief.

Garcia said: "There was nothing I could do. I corrected right away."

Several strides later, as the horses were scrambling to settle in for the run past the grandstand, UAE Derby winner Toast of New York smacked Whitney winner Moreno.

"The nine horse, Toast of New York, probably came over and did more damage 100 yards out of the gate," Baffert said. "The nine was doing more crushing back there than we did."

Out of the chaos, Bayern emerged with the lead, appropriate since he is usually the fastest horse away from the gate.

"If you try to slow him down, he's just not effective," Baffert said. "If he was a football player, he'd be in the SEC. I mean, he is fast."

Candy Boy was sixth, followed by Cigar Street, Zivo, Imperative and Footbridge. V.E. Day was 11th, and then came Prayer for Relief, Majestic Harbor and Moreno.

Bayern's two previous biggest wins of the year were in the Haskell Invitational and Pennsylvania Derby. He missed the Kentucky Derby and finished ninth in the Preakness. He turned the corner with an impressive win in the Woody Stephens on the Belmont Stakes undercard, starting a run of four stakes wins in his last five starts.

Bayern's victory likely denies California Chrome champion 3-year-old honors, and places him squarely in the running for Horse of the Year.

"We don't vote, but we're proud of our horse," Baffert said. "He came through on the big day, and that's what matters. That's why they call it championship racing."

In the other races:

Bobby's Kitten edged 7-2 favorite No Nay Never by a half-length to win the $1 million Turf Sprint.

Texas Red pulled a 13-1 upset in the $2 million Juvenile. The Desormeaux brothers teamed for the victory. Kent was aboard for his fifth Cup victory. Keith, the trainer and a co-owner, got his first win in the championships.

Main Sequence repelled the late challenge of Flintshire to win the $3 million Turf by a half-length, giving the U.S. the victory in a race usually dominated by Europeans.

Work All Week held off defending champion Secret Circle by a half-length in the $1.5 million Sprint.