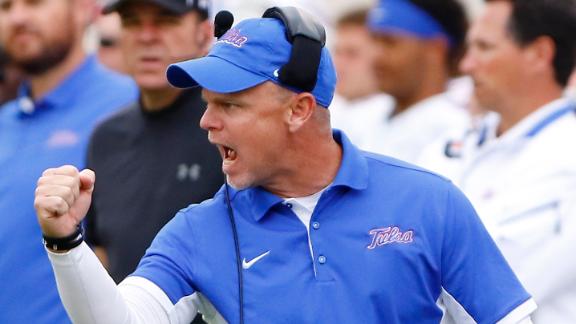 Baylor passing game coordinator Jeff Lebby was on Tulsa's sideline during the Golden Hurricane's game with Oklahoma on Saturday, a violation of NCAA rules since the Sooners and Bears will meet later this season.

"I don't know what he was doing here," OU coach Bob Stoops said Monday when asked about Lebby during his weekly news conference. "It's something that needs to be dealt with by our people and the Big 12 office. I've got a team to coach. I'm sure they'll handle those matters."

Lebby was a student assistant coach at Oklahoma under Stoops through 2006. He also worked with Tulsa coach Philip Montgomery, who was Baylor's offensive coordinator last season.

Baylor coach Art Briles said he called Stoops on Saturday night to apologize after discovering that Lebby was at the game.

"If I had been aware, that situation would've never happened," Briles said. "When I found out, we alerted all the proper officials on both sides.

"It's embarrassing to me, quite honestly. To me, there's not an advantage first and foremost in today's world. I mean, we had every film they ever got, and they get every film we've ever got. So as far as scouting advantage, you're at a disadvantage standing on the sideline. I don't think he was there that long -- maybe a quarter. I'm not even sure."

Montgomery took responsibility for Lebby's presence and said he also had apologized to and discussed the matter with Stoops.

"Obviously, it was a mistake and a poor decision on my part to leave a credential for Jeff and his wife," Montgomery said Monday. "They were in the Oklahoma City/Norman area for a wedding and came to the game to support me.

"There was no malicious intent on my part. I've known Jeff since he was in the sixth grade. I called Coach Stoops today and apologized for this situation."

Briles, in a radio interview with ESPN Central Texas, said Lebby's ties to Oklahoma and to Tulsa's coaching staff were no excuse for his actions.

"As a coach, you're not ever a fan," Briles said. "You always fall under different guidelines. He's young and he'll learn.

"But from a strategic standpoint or an advantage, it's absolutely goose egg. You learn more watching on TV than you can standing on the sideline."

Lebby is married to Briles' daughter.

"It's unfortunate," Briles said. "I hate it. I hate it for the perception standpoint."

Baylor already has suspended a pair of assistants for recruiting violations this year. Offensive coordinator Kendal Briles and receivers coach Tate Wallis both sat out the Bears' game with Lamar on Sept. 12.

Information from ESPN staff writer Max Olson was used in this report.