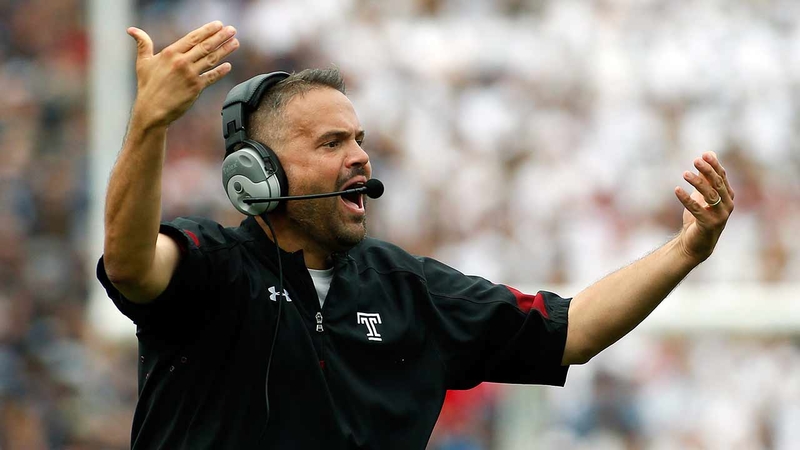 Rhule becomes the full-time replacement for two-time Big 12 champion coach Art Briles, who was dismissed after a scathing report over the university's handling of sexual assault complaints, including some against football players.

Rhule, who had consecutive 10-win seasons with the Owls, will be introduced by Baylor on the Waco campus Wednesday.

The Bears are 6-6, and headed to the Cactus Bowl despite a six-game skid under former Wake Forest coach Jim Grobe, who had been out of coaching two years when he put his retirement on hold in May to serve as Baylor's acting head coach this season. Grobe told Rhoades back in September, when the Bears were still undefeated, that he didn't want to be a candidate for the full-time job.

The 41-year-old Rhule is a former Penn State linebacker who has a monumental task ahead of him in putting together a coaching staff and a recruiting class for the Bears. With a month-long quiet period in recruiting starting Monday, Baylor has only one firm verbal commitment.

"I am truly honored and humbled to join the Baylor family," Rhule said in a statement . "Baylor is a tremendous institution with a history of football success and I know the passion that so many have for the Bears will help bring the community together to reach even greater heights. I am excited to get started."

Mack Rhoades, who took over as athletic director in August, said in a statement that he wanted to find "a coach who shared our values, who had demonstrated success, who showed a true commitment to the overall student-athlete" and could lead the Bears to championships.

"We found all of that and more in Matt, and I know that he will be a perfect fit with the Baylor family," Rhoades said.

Rhule was 28-23 in four seasons at Temple, his only previous head coaching job. The Owls are 10-3 this season and won the American Athletic Conference championship with a win over Navy last weekend, after going 10-4 in 2015. Rhule last year got a contract extension from Temple through 2021.

Baylor, with a dozen seniors, has about 70 scholarship players this season after half of its highly touted 22-player signing class from last spring backed out of their commitments. It also seems unlikely that any of the assistant coaches, all retained from Briles' staff, will remain.

Briles took Baylor from the bottom of the Big 12 to back-to-back conference titles (2013, 2014) and six consecutive bowl games that ended a 16-year postseason drought. Before Briles, the Bears hadn't had a winning season since before the conference's inception in 1996, and his tenure on the field included Robert Griffin III winning the school's only Heisman Trophy in 2011. Baylor just missed the first four-team College Football Playoff in 2014, the same year a new $264 million campus stadium opened on the banks of the Brazos River.

But the nation's largest Baptist university was rocked by scandal earlier this year and an investigation by the Pepper Hamilton law firm determined that the school mishandled assault claims for years. The firm's report in May led to the immediate suspension of Briles, who had eight seasons left on his contract and reached an undisclosed settlement with the school a month later.

The school still faces several federal lawsuits by women who say the university ignored or tried to suppress their claims of sexual and physical assault. School regents recently disclosed that 17 women had reported domestic violence or sexual assaults that involved 19 football players since 2011.

Two women who reported being gang-raped reached a settlement with the school last month. While details of the attacks weren't disclosed, Baylor interim President David Garland said then that players implicated in those cases were no longer at the school.

There were times this season when Grobe appeared to be undermined by the assistant coaches, a group including Briles' son, Kendal, the offensive coordinator, and son-in-law Jeff Lebby, the running backs coach. The night before a 40-point loss to TCU, the Bears' worst at home since 2005, assistant coaches and several staff members issued a statement on Twitter expressing their support for Art Briles and disputing claims by regents that the former coach knew of an alleged gang rape.

The Bears haven't won since becoming the only FBS school to start 6-0 each of the last four seasons. They play Boise State (10-2) on Dec. 27 in Phoenix. Their six-game skid is the longest since losing nine in a row - the final eight games of the 2007 season and the 2008 opener in Briles' debut.