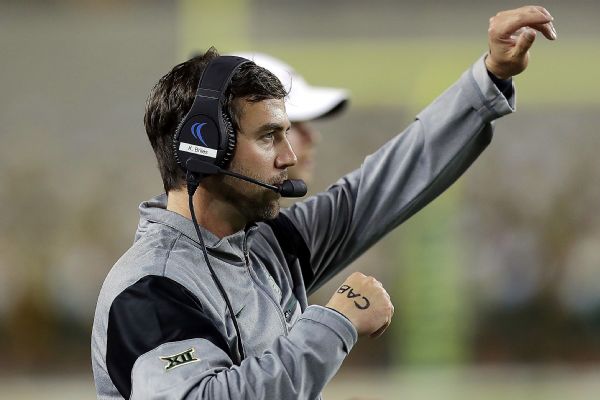 The NCAA says Briles had improper contact with a recruit. Baylor officials are attempting to get the level of infractions reduced, a source said. Specific details about the alleged violations weren't immediately known.

Briles' meeting with NCAA officials came the day before his 34th birthday. A source said the NCAA investigation is not related to the school's ongoing sexual assault scandal.

In 2015, Baylor officials suspended Briles one game for a violation related to evaluations of prospective recruits in the spring of 2015. Briles, the son of former Baylor coach Art Briles,and receiver coach Tate Wallis were suspended and not allowed to coach in the 2015 season opener against Lamar.

In January 2015, Sports Illustrated reported that the NCAA was looking into whether Briles committed a violation by visiting 2015 recruit J.W. Ketchum during a noncontact period in the fall of 2014.

Briles has been at Baylor since 2008 and is in his second season as Bears offensive coordinator. He is regarded as the Bears' top recruiter and was named Big 12 recruiter of the year in 2014 by the websites Rivals, Scout and 247Sports.

Last week, Briles and other Baylor assistant coaches released a statement via Twitter, in which they disputed claims by a board of regents member that Art Briles was aware of an alleged gang rape involving former Bears players and didn't report it to proper authorities.

Art Briles, who guided the Bears to a 65-37 record and at least a share of two Big 12 titles from 2008 to '15, was fired May 26 after an investigation by Philadelphia law firm Pepper Hamilton found widespread problems with the way Baylor responded to allegations of sexual assault by students, including several football players. University president Kenneth Starr was demoted and then fired, and McCaw was suspended and then resigned.