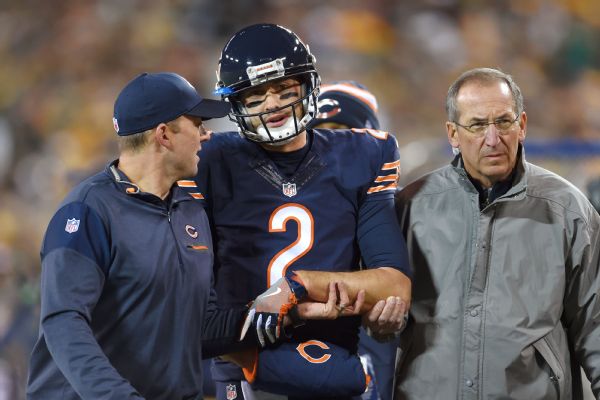 Hoyer could be placed on injured reserve.

He suffered the injury in the second quarter of Thursday night's 26-10 loss to the Green Bay Packers. Hoyer was hit hard by Green Bay defenders Julius Peppers and Clay Matthews on a third-down pass attempt that fell incomplete with 10:03 left in the quarter.

Hoyer stayed on the turf for several minutes but eventually walked off the field under his own power. The quarterback appeared to be clutching his left arm when examined by members of the Bears' medical staff.

Hoyer was 4-of-11 for 49 yards before he left the field. He was replaced byMatt Barkley, who finished 6-of-15 for 81 yards with no touchdowns and two interceptions. Veteran Jay Cutlerwas inactive because of a thumb injury.

Cutler hasn't played since suffering his thumb injury in Week 2.

The Bears' next game is Oct. 31, a Monday night game against the Minnesota Vikings. Asked for an update on Cutler on Thursday night, Bears coach John Fox would only say that when Cutler is cleared he will play.

"We're waiting on the medical people. When he's cleared, we'll have him out there. When exactly that's going to be, I can't answer. But he's getting closer," he told reporters.

If Cutler can't play, the Bears likely will have to sign another quarterback this week as Barkley would be the only healthy quarterback on the roster.