Ben Simmons unwraps MSG win after doubling down on turnovers 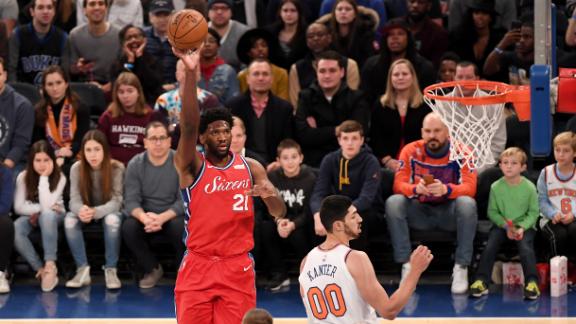 "I didn't get anything yet - besides a win, but I'll take just take the win."

Ben Simmons and the Philadelphia 76ers got what they came for at Madison Square Garden on Monday, defeating the Knicks 105-98. Simmons had a quiet game (by his standards), finishing with 8 points, 8 rebounds and 3 assists.

Philadelphia, who had not played a Christmas Day game since appearing in 2001 with Allen Iverson leading the way, entered Monday's game in New York having lost nine of their past ten, and looking to snap a five-game losing streak.

Simmons said the win was "huge" for the team as they get set to embark on a three-game Western road trip, facing Portland, Denver and Phoenix.

"That's what we definitely needed, and it's on a special day so it was great," he said.

Simmons made a slow start against the Knicks, taking just three shots in the first half, and only eight for the game; the Knicks defense, at times, made it hard for the Australian to get to his preferred spots.

One particular point of concern Simmons was looking to correct was his turnovers - he'd been averaging four per game over the course of the five-game losing streak - and finished with just two against New York.

"Personally, for me, I was trying to make less errors on the court," said Simmons. "I think I only had one or two turnovers so I was [definitely] trying to lower those."

Post-game, 76ers' coach Brett Brown spoke about Simmons' ability to contribute in ways other than what is seen on a stat sheet.

"Don't get tripped by the stat sheets, it was deeper than that," Brown said post-game. "I think he did a good job of pushing the pace and finding some things early; maybe you're going to look on the stat sheet and it's not going to be littered with stats like it normally is with him. I thought defensively, he came up with some big possessions. Trying to pressure their defense when their offense slowed up, he had a significant part of [that] with his 6'10 size and 7-foot plus wingspan."

It was also Simmons' first time as an NBA player at Madison Square Garden and although his father hails from the South Bronx, the Sixers rookie said the game didn't have any extra special meaning for him aside from just having his family and friends come watch him play.

"Just having my family here, really," he said. "That means a lot. My grandparents watching me; uncles, aunts - I think that means more [to me] than just playing here."

After getting the gift they really needed, the players now get some time to spend with their families, who Brett Brown said flew in to meet the team in New York.

"There's a flip side to today's game that when it ends you want them to remember what day it is and to enjoy it with their friends and family," he said.

Simmons said he celebrated Christmas with his family on Sunday, now he's looking forward to getting some rest before the road trip.

"Last night we had dinner, everyone was there, so now we go back to Philly and get some rest."