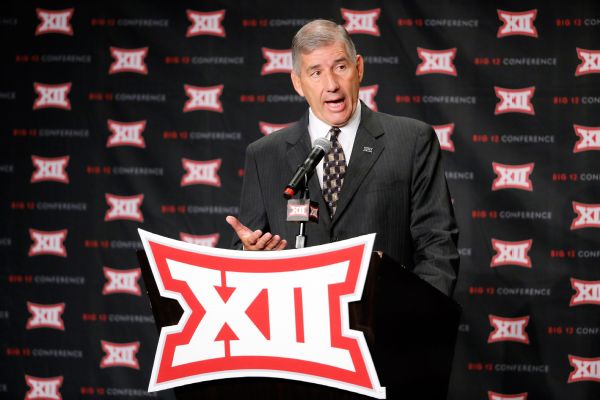 NCAA enforcement staff has interviewed former Baylor administrators, Title IX investigators and some of the women who alleged football players sexually assaulted them, as it continues to investigate whether its rules were violated during the school's sexual assault scandal, sources familiar with the investigation told Outside the Lines on Friday.

Sources said NCAA investigators haven't yet focused on specific allegations of wrongdoing, instead casting a wide net to determine if any NCAA rules might have been violated. The NCAA is also asking whether Baylor players might have been provided improper recruiting inducements and other illegal benefits while playing for the Bears.

An NCAA spokesman declined to comment when reached by ESPN on Friday. A Baylor spokesman also declined comment; the NCAA discourages its member schools from commenting on ongoing investigations.

Big 12 Commissioner Bob Bowlsby, speaking Friday while at a regularly scheduled conference board meeting in Dallas, said the scandal at the Baptist university in Waco, Texas, "just continues to ooze."

"I think everybody's pretty much in the barrel, but I don't know if anybody knows where the bottom of the barrel is," he told ESPN.

On May 25, the day Baylor's board of regents released details about law firm Pepper Hamilton's investigation into how the university responded to allegations of sexual assault by students, including football players, a handful of regents and senior administrators flew to Indianapolis to meet with NCAA officials, sharing their findings and vowing to fully cooperate if the organization wanted to further investigate.

On Thursday, in a court filing in response to former football director of operations Colin Shillinglaw's libel lawsuit against the school and several members of its senior leadership, the university released text messages and emails that indicated former Baylor coach Art Briles and his assistants actively intervened in the discipline of football players, worked to keep their cases under wraps and tried to arrange legal representation for their players.

Bowlsby told ESPN on Friday that the NCAA could be looking into some of the issues raised in the text messages as they pertain to extra benefits.

"I doubt very much that most students have anybody available to steer them to legal counsel," he said.

Bowlsby noted that he would need to know the specific circumstances; referring a student-athlete to a lawyer might not qualify as an extra benefit, but transporting him to an attorney's office and negotiating a payment might.

Asked whether helping a student circumvent the school's student conduct code also could be considered, Bowlsby added: "Yeah, I think that would likely constitute an extra benefit, as well. ... Anything that a student-athlete received that other students wouldn't be privy to, there could certainly be a case made to consider it an extra benefit."

The 54-page response by Baylor on Thursday also claimed Briles personally appealed to then-university president Ken Starr on behalf of former defensive lineman Tevin Elliott when he was charged with a second count of plagiarism, which made him ineligible for the 2011 season. After Elliott missed an April 2011 appeal deadline, according to the response, Briles "personally took up Elliott's cause more than two months later" in June.

"The coach notified President Starr in an email that Elliott wanted to appeal the suspension," the response says. "The unusual request by Coach Briles triggered concern among top Baylor administrators, who complained to President Starr and among themselves that overturning Elliott's suspension after the appeal deadline would send a message that athletes were above the rules."

The response says Elliott's appeal letter was suspect and "appeared to have been authored by an academic adviser in the Athletics Department. Nevertheless, President Starr ignored the decision of his Provost and overturned the suspension."

"We have some tools at our disposal, but I think there's a right time to use those and a right situation to use them, and it's an ongoing process," he said.

Bowlsby noted there was a desire and a "shared frustration" among the members to get to the bottom of what happened and figure out all the parties involved.

Bowlsby said he had not previously seen any of the correspondence that was in the legal filing Thursday. Baylor Interim President David Garland was among the university presidents at the conference headquarters near Dallas on Friday for a regularly scheduled Big 12 board meeting, at which the issues -- but not the text messages, specifically -- were discussed.

"I think he was appalled as anyone at the things that keep coming out," Bowlsby said of Garland, declining to go into detail about the conversation. "We all kind of have the same feelings. It's awful. It's appalling. And the more graphic the information, the worse it seems."

Bowlsby noted that the only time the so-called death penalty -- the most severe of NCAA penalties -- was used was when it was possible to find "tangible athletics violations and money that changed hands and benefits that were provided that shouldn't have been." He noted that the death penalty wasn't even used for Penn State -- a situation where the NCAA ended up having to back off the sanctions it imposed.

"I don't know that anybody's going to get the death penalty without a pretty thorough finding of athletics violations that go wide and deep, and as far as I know, that hasn't been documented yet," Bowlsby said. "These are heinous things that happened and many of the things that happened involved athletes, but it's not clear that either the conference or the NCAA have real standing in this."

Stuart Brown, an Atlanta-based attorney who works in NCAA-related matters, said he didn't think the NCAA would investigate how the school responded to allegations of sexual assault, and it might not seek to impose penalties for moral issues, like it did in the Jerry Sandusky scandal at Penn State. He said he believes the NCAA would focus more on recruiting violations, coaches' actions and whether the school altered its conduct code or academic standards for players.

If Baylor was found to be in violation of NCAA rules in those areas, it could face failure to monitor or lack of institutional control. Briles could also face a show-cause penalty, which would require a school that hires him to appear before the NCAA infractions committee. If his assistant coaches broke rules, he could be charged with failing to monitor a staff member, which is what the NCAA charged Louisville basketball coach Rick Pitino with after its investigation into allegations made by an escort.

"All of those would still be on the table, depending on what in fact the NCAA gets, and they could pursue all of those without getting into the societal judgment part of it," Brown said. "There are a couple of things the NCAA can look into and address without looking at the underlying social issues that are beyond its jurisdiction. There are other forums -- mainly the court system -- where those issues are better resolved."
Related topics:
sportsespnbaylor bearsbowlsbyncaacollege footballart brilesespnw
Copyright © 2022 ESPN Internet Ventures. All rights reserved.
TOP STORIES
Building owner charged in fire that led to firefighter's death
Witness: Trump grabbed steering wheel, demanded to go to Capitol
Carry permits expected to skyrocket in NJ after SCOTUS ruling
Epstein associate Ghislaine Maxwell sentenced to 20 years in prison
Bryce Harper set for thumb surgery, Phils hope he plays this year
Black bear dies after getting stuck inside hot car in Tennessee
$6 billion will be infused into Navy Yard to make it a 'destination'
Show More
Grandmother of Uvalde school shooter released from hospital
Photos released of vehicle sought in Bridgeton hit-and-run
The official teaser trailer for 'Hocus Pocus 2' has arrived: Watch now
Chestnut Hill neighbors in a pickle over pickleball courts
Woman critically injured after being hit by Philly police vehicle
More TOP STORIES News