Bills, already past team record, to cap season-ticket sales at 60,000 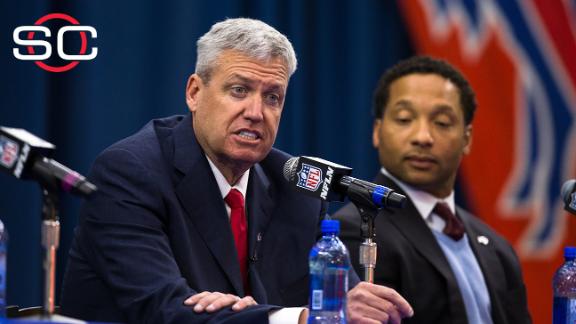 "First and foremost, it goes to our fans and it goes to our ownership, the Pegulas, who obviously provided stability for this franchise in western New York," Bills president Russ Brandon said Monday. "As I said at the time of the sale, the collective anvil that had been on the back of all of our shoulders [about the future of the team], we were able to put that in Lake Erie, and that played a huge role in today's announcement."

The Bills will cap season tickets at 60,000 and institute a waiting list if demand exceeds that number. Individual tickets are sold out for all home games except Buffalo's regular-season finale against the New York Jets.

Terry and Kim Pegula purchasing the team in October resulted in record season-ticket renewals, Brandon said, and sales were further boosted by the hire of coach Rex Ryan in January.

"I think it's a combination of a lot of things," Brandon said. "Direction of the franchise: I think people feel pretty good about what [general manager Doug Whaley] and Rex are doing with the product on the field. We could see it last year. We had a pretty significant increase last year in season-ticket sales.

The Bills sold 47,482 season tickets in 2014, the 15th consecutive season that the team missed the playoffs.

"That the team on the field has not been to the playoffs in the last 15 years is obviously difficult for anyone who is involved in this organization, in any department," Brandon said. "But it goes back to our fans, and it goes back to the loyalty they've shown -- not just this year, we're sitting here talking about a record, and that's great -- I'm talking about the loyalty that our fans have provided the entire time that we've been on board trying to drive this business.

"It's an incredible testament to them, and I know that Rex and Doug Whaley and the football department are going to do everything in their power to put us over the hump."