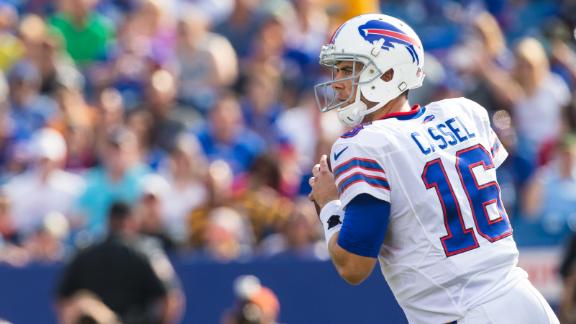 Five days after naming Tyrod Taylor as their starting quarterback for this season, the Buffalo Bills released veteran quarterback Matt Cassel on Saturday.

Manuel, the Bills' 2013 first-round draft choice who started 14 games over the past two seasons, completed 20 of 30 passes this preseason for 358 yards and four touchdowns.

Cassel, 33, was set to earn a $4.15 million base salary this season. By releasing Cassel and veteran running back Fred Jackson earlier this week, the Bills have saved about $6.7 million against their 2015 salary cap.

The Bills can carry over unused 2015 salary-cap space into 2016, when they need room to re-sign Pro Bowl defensive tackle Marcell Dareus as well as linebacker Nigel Bradham and left tackle Cordy Glenn. The Bills have about $5.5 million in 2016 cap space, according to ESPN Stats & Information data using a projected $150 million salary cap.

"I didn't have a ton of opportunities as you know," Cassel said after the Bills' preseason win Aug. 29 over the Pittsburgh Steelers. "I had about four series the entire preseason, so you can make what you will out of it."

Cassel, who was acquired in March in a trade with the Minnesota Vikings, received the majority of first-team reps during training camp practices.