Bills to play Browns in Buffalo 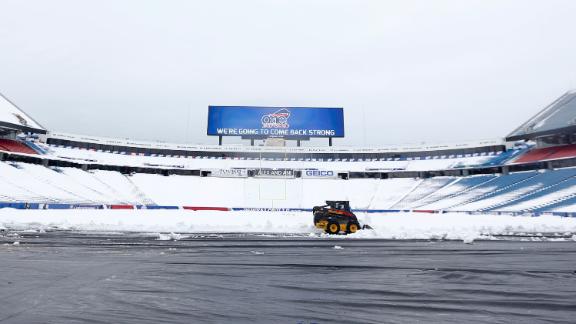 He said he expects the stadium to be "100 percent operational'' on Sunday.

The team was forced to play Monday night at Ford Field in Detroit as Ralph Wilson Stadium had been snowbound from last week's severe lake-effect storms.

The Bills defeated the Jets 38-3 Monday night to improve to 6-5 this season.After the game, Bills coach Doug Marrone gave a ceremonial game ball to all of the first responders in Erie County who assisted during last week's snow emergency in Buffalo. There were none present in the locker room, but Marrone held up the ball for his players.

The Lions stepped up to host Monday's game, even going as far to paint the Bills' logos on the Ford Field turf and to set up a temporary locker room at their facility. Marrone thanked them after the game.

"I don't think we would have been as prepared if it wasn't how they opened their arms up this week to do everything to help us," he said.

A team official had told ESPN NFL Insider Adam Schefter earlier Monday, however, that the team would be able to return home on Sunday. Brandon made that news official Tuesday.

The Bills tweeted out a before-and-after picture of Ralph Wilson Stadium on Tuesday.

Brandon provided the update Tuesday after a tour of the stadium uncovered some minor damage from the storms that dumped more than 6 feet of snow on the Buffalo region last week.

The problems ranged from burst pipes, to leakage, to parts of the wall separating the field from the stands being damaged during the snow-removal process. A portion of the wall of the Bills' practice facility caved in, but has already been repaired.

Brandon said engineers found no structural issues to the stadium itself.

ESPN.com's Mike Rodak and The Associated Press contributed to this report.