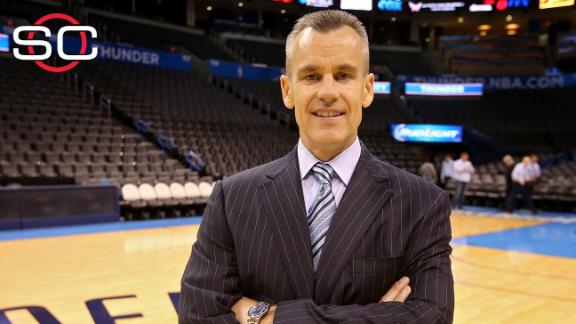 OKLAHOMA CITY -- After touring the arena floor with owner Clay Bennett, new Oklahoma City Thunder coach Billy Donovan was formally introduced Friday, calling his jump from the University of Florida to the NBA an "exciting challenge."

"It's been a complete whirlwind for me the last four or five days," Donovan said. "I am extremely thankful the way [Thunder general manager Sam Presti] laid out the organization to me over about a two-and-a-half-day period because, to be honest with you, I really did not know a lot about the Oklahoma City Thunder. I knew of Sam, I obviously knew of the players and organization, but I didn't know what it was about. And it was that -- that really made me turn my head when I started to find out more, that I think the qualities, the values, what this organization is about is directly in line and mirrors what I believe."

Donovan, who replaces Scott Brooks who was fired on April 22, spent the past 19 seasons at Florida, building one of the strongest college basketball programs in the country. He led the Gators to two national titles and four Final Four appearances. However, he enters the NBA without any professional coaching experience.

"I've been an NBA coach before," Donovan said. "Well, it was only for a day."

In 2007, Donovan agreed to become the Orlando Magic's head coach but later backed out of his contract with the team to return to Florida, citing an emotional change of heart. But on Friday, he said there were no second thoughts this time around.

"I think the Orlando situation really had nothing to do with Orlando," Donovan said. "It had a lot more to do with me and I think where I was at, at that time in my life. We were coming off two national championships and I didn't feel like my job was completed there. I felt like I had more to do.

"So I felt for me, after 19 years, I left my heart and soul and gave the University of Florida and Gainesville everything I had and I just had a little bit more peace about this in this point of my life, and believe me, the last 48 hours have been very, very difficult and very, very challenging because there was a lot of deep, long-lasting relationships that were left back there."

Donovan, 49, was the only candidate interviewed for the Thunder's position. Presti targeted Donovan as Brooks' replacement and spent two days in Florida making the pitch to him.

"We cast a wide net, we stepped back and looked at lots of different people," Presti said. "But as we were looking through the candidates and people we had identified, it became pretty evident to us that Billy Donovan was the right person for this position, to lead the Thunder on the sidelines."

Donovan takes over a high-profile NBA team, one with two superstars in Kevin Durant and Russell Westbrook, that has experienced lofty levels of success, including reaching three of the past four Western Conference finals and one NBA Finals. Donovan said he understands the expectations and pressures that will come with this job.

"I think any time you walk into the unknown, there's going to be a level of uncertainty -- I don't think there's any question about that. I'm OK with that," Donovan said. "I'm excited for the challenge, I'm excited to bring value."

Donovan is known for building strong bonds with players, which he says will be a focus when it comes to his two new superstars.

Durant, who was in attendance for the news conference, said by phone on Thursday he is excited about the hire, and feels good about the direction Donovan will take the team.

"I know he's going to do a good job because from what I've heard, he works extremely hard, his attention to detail is one of the best, and everybody's been telling me he's an NBA coach coaching in college," Durant said. "So I'm excited. I'm very excited to learn from him and get better from him and try my best to do whatever he tells me to do. I can't wait to get started."

Durant's future is a cloud that will hang over Donovan's first season, with the reigning MVP set to be an unrestricted free agent in the summer of 2016. Donovan, who didn't recruit Durant in college, will be tasked with helping convince the Thunder star to remain in Oklahoma City.

"Whatever decision that he has to make, I feel very, very strongly about the organization, and about Sam and Mr. Bennett and the commitment, and I think a lot of those things probably line up with Kevin and how he feels," Donovan said. "I think the organization and Kevin -- and this is from an outsider -- are a great match in terms of he's been, along with Russell, the face of this franchise. Let's call it like it is. It's been him and Russell doing that, and that's really, really special."