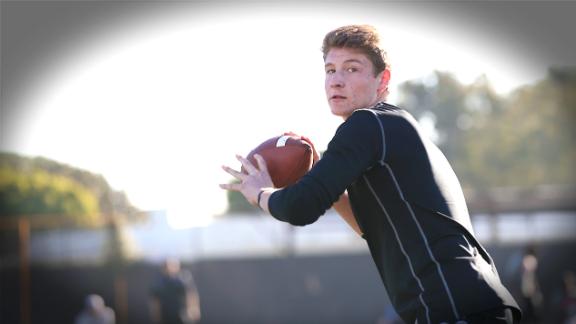 After losing a commitment from four-star quarterback Ricky Town in January, Alabama finally found its man at quarterback as ESPN 300 signal-caller Blake Barnett pledged to the Crimson Tide over Oregon on Wednesday.

The No. 56 player nationally in the ESPN 300 announced his decision live on BleacherReport.com.

"I think when I went back there and speaking to the coaches ahead of time, that's when I really started to figure out that that was the place I really wanted to be," Barnett told ESPN.com.

"I think academically, athletically and as a person as well, I think it will develop me the best for my life in general. I fell in love with the campus itself and with the facilities obviously, but I think what Alabama can develop me to be is what really convinced me."

"When I went back there, I got to see Coach Saban quite a bit -- I probably met with him six times or so over three days," he said. "So we spent a lot of time together and I had spoken with him several times on the phone, so I've built a great relationship with Coach Saban and Coach Kiffin as well, since he is my main recruiter. Those are the guys who will be coaching me, and I feel very comfortable with them."

"I think I committed too early," he said of his initial Fighting Irish decision. "I made an impulse decision based off of emotion with my family. We kind of rushed in to things. I regret that [committing to Notre Dame] to this day. We just kind of made it off of impulse and weren't really thinking of things logically, and I realized that wasn't the place for me and that's not where I wanted to be."

As a junior at Santiago High School in Corona, California, Barnett threw for more than 2,300 yards and 22 touchdowns while also rushing for nearly 700 yards and 13 more scores.

Barnett was the first player invited to the 2014 Elite 11 finals after his performance at the Los Angeles regional in January. It's the third consecutive year the Crimson Tide have landed an Elite 11 finalist. Elite 11 is the nation's premier quarterback competition for prep athletes.

The Crimson Tide now have 19 commitments, including 16 in the ESPN 300. Alabama currently has the nation's No. 1 recruiting class. It has had the top class for the past three years.