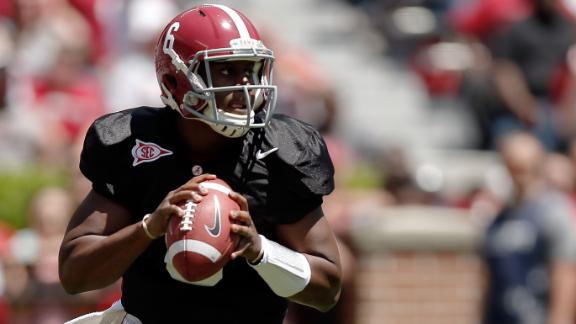 Blake Sims will start at quarterback for No. 2 Alabama's season opener Saturday against West Virginia, according to CBSSports.com.

The plan is for Jake Coker to back up Sims and see some playing time, the website reported, citing a source.

The game will serve as a continuation of the audition to replace AJ McCarron under center.

Coach Nick Saban had said Monday that he wasn't ready to name a starter.

"We're going to continue to rep both guys," he said. "We feel like both guys have done a good job. Obviously someone has to start the game, so we'll make that decision sometime this week."

Saban also had said that whoever starts the opener might not finish it.

Although the race has been narrowed to Sims and Coker, it has been unclear who has the edge in the competition. Alabama's scrimmages haven't been open to the media, and passing statistics have not been provided by the university during preseason camp.

Sims, however, is said to be more comfortable in the offense than Coker. The fifth-year senior and longtime backup to McCarron also has a better relationship with his teammates, according to Saban.

Coker has been playing catch-up since transferring from Florida State this summer. The 6-foot-5, 230-pound former backup to Jameis Winston is more of a prototypical passer compared to Sims, who has been primarily a read-option quarterback. But Coker has needed time to adjust to a new playbook and new set of receivers at Alabama.

"He doesn't have the same knowledge and experience," Saban said of Coker. "We're trying to get him more and more familiar so he can play with the rhythm we want offensively."

The quarterback battle can be looked as a glass either half full or half empty, Saban said.

"I do think competition is something that helps all players at any position," he said. "The one unique thing about the quarterback is you'd definitely like to get the rest of the offensive team sort of in sync with the guy that plays the position. So, to me, there's a big upside to two guys competing, and we feel both are doing well. But then the other side of that is the continuity you're trying to bring to the rest of your team."

Information from ESPN.com's Alex Scarborough was used in this report.

Sims To Start For Alabama
Danny Kanell discusses the news that Blake Sims will start at quarterback for Alabama.

Drive Through: Is Sims Right For Alabama?
According to reports, Blake Sims will be the starting quarterback for Alabama Saturday against West Virginia. Can he take the Crimson Tide all the way to a title game?