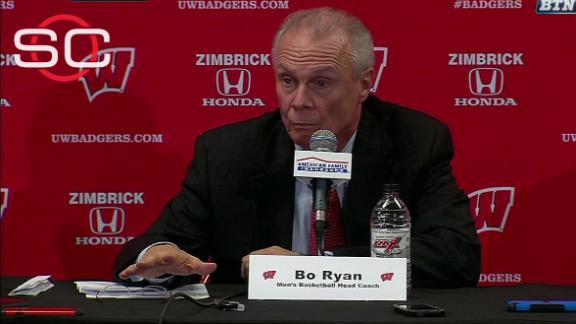 Bo Ryan will no longer call the shots for the Wisconsin men's basketball team, but he has a message forBadgersfans: "Don't countthis team out yet."

Ryan told ESPN on Wednesday thatassociate head coach Greg Gard, a longtime Badgers assistant who will take over the program on an interim basis, needs to keep the team together and demonstrate that it is improving.

"He's got time," Ryan said. "Greg has been a part of making sure we're consistent every year."

The Badgers (7-5) have been anything but consistent this season, but Ryan said that could be attributed to the absence of freshmanBrevin Pritzl (foot injury) and Belgian forward Andy Van Vliet, who was ruled ineligible for the season due to an international amateurism rule.

"I have to be who I am," Gard told ESPN. "That's what I told the team: My role has changed, my position on the boat has changed, but who I am and what I believe in is not changing. I just finished meeting with the team, and I told them that the most important thing in all of this is those 17 guys in the locker room.

"The last 24 hours has tipped their world upside down a little bit. I had to make sure they understood that they will always be my first priority and I will help them navigate this transition."

Ryan, who announced in June that he would coach this season and then step down, unexpectedly announced his retirement, effective immediately, after Tuesday's win over Texas A&M-Corpus Christi.

"I really wanted to have something like this done earlier," Ryan told ESPN. "I know this is unorthodox to some people, but in the long run, [Gard] will have a chance to take over before the Big Ten season. I had to make the decision in time to give him a chance to be able to show what he knows."

Gard, who said he was informed of Ryan's decision on Tuesday afternoon, told ESPN that after going to bed at 2 a.m., he woke up at 3 a.m. and was unable to sleep.

"I talked to Coach Ryan twice in the afternoon, and he indicated this was the direction he was going, Gard said. "It's what he wanted to do. His decision. ... It was always a matter of when, not if, but there are 100 ways to get into this profession and no manual how to exit on your own accord."

Ryan said part of the reason he came back for this season was to give Gard time to be with his father, Glen, who was diagnosed with cancer in the spring and died this fall. Ryan said the demands on Gard's time to fly around the country meeting with doctors and helping Gard's dad put his retirement on the back burner. Following Glen Gard's death, Ryan then spoke with athletic director Barry Alvarez and decided the semester break would be an appropriate time to step down.

"I was pretty shocked to say the least," Kaminsky told ESPN. "I don't think he told very many people what he was thinking.''

Whether Gard will get the job permanently remains to be seen. Alvarez has made no promises, only naming Gard as interim head coach. But along with Ryan, the longtime assistant will have plenty of cheerleaders in his corner.

"If someone asks me, I'll say, 'I think Coach Gard deserves it more so than many other people,'" Kaminsky said. "I don't think if I saw a national search for a new coach -- when I think he's such a good candidate -- I'd be too happy. At the end of the day, I don't know what the athletic department's stance is, but if Coach Ryan gives him his stamp of approval, that's good enough for me."

Ryan said Gard's best attributes in selling himself for the job are his recruiting knowledge to the Wisconsin system and familiarity with the Big Ten, handling the majority of scouting.

Ryan started his journey in 1972 as a junior varsity high school coach outside of Philadelphia, slowly climbing the coaching ranks through the high school, Division III and finally Division I ranks. Ryan leaves as the winningest coach at Wisconsin, with 364 wins over 14-plus seasons -- including a school-record 36 wins last season. Last year, he was nominated for the first time to the Naismith Hall of Fame.

As for the immediate future, Ryan said he was boarding an airplane to get an early start on his annual break during exam week.

"We always try to get some R&R this time of the year," Ryan told ESPN. "We had already talked about getting out of the city, trying to relax a little bit. This time, I guess we'll stretch it just a little bit longer."

As for the rest of the Badgers' season?

"I'll be checking some games out," Ryan said. "But I'm not going to be looking over anybody's shoulder."