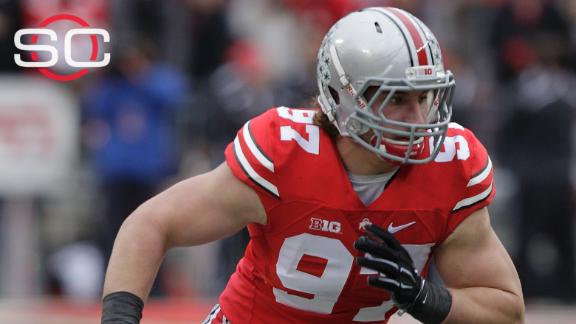 CHICAGO -- Ohio State will open its national title defense without two of its most valuable players, including All-America defensive end Joey Bosa.

The Buckeyes announced suspensions for Bosa, H-backs Jalin Marshall and Dontre Wilson, and wide receiver Corey Smithon Thursday,increasing the degree of difficulty when they visit Virginia Tech on Sept. 7.

A source told ESPN's Joe Schad that the suspensions were due to either marijuana or academics. Ohio State cited a violation of athletic department policy in announcing the bans.

"I kind of knew about this for a little bit," he said. "The university and the athletic department has policies that I fully support. Whether it's a sprained ankle or stuff [like a suspension], you try to create a culture and move forward. We lost Braxton Miller [last season] 10 days before our first game, we lost J.T. Barrett a week before the Big Ten championship game, and you just push forward. Get going, move forward."

Bosa is the reigning Big Ten Defensive Player of the Year and is projected as a potential No. 1 draft pick if he elects to skip his senior season, as is widely expected.

Marshall emerged as one of Ohio State's most versatile weapons on the way to the championship a year ago, piling up yardage as both a receiver and a rusher and helping expand Meyer's spread offense.

Wilson and Smith combined for 41 catches for 555 yards.

Virginia Tech was the only team to beat Ohio State last season. Ohio State is No. 1 in the preseason USA Today Coaches Poll, which was released Thursday.