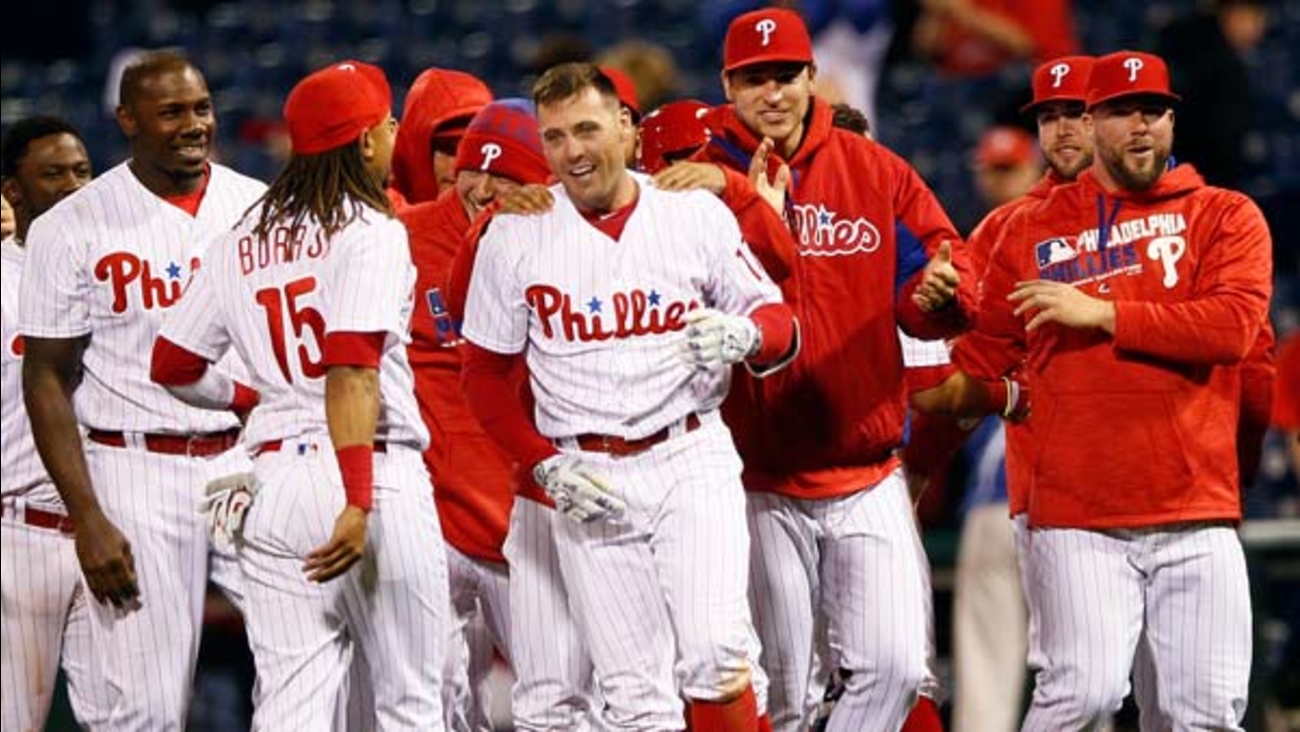 AP
By ROB MAADDI AP Sports Writer
Peter Bourjos drove in the winning run on an infield single with two outs in the 11th inning to lift the Philadelphia Phillies to a 5-4 win over the New York Mets on Wednesday night.

Freddy Galvis hit a two-run homer for the Phillies, who avoided a three-game sweep. Jeanmar Gomez (2-0) tossed two scoreless innings for the win.

Galvis ripped a one-out double to right off Hansel Robles (0-1) with one out in the 11th.

After David Lough was intentionally walked, the runners advanced on a wild pitch. The Mets started to walk pinch-hitter Emmanuel Burriss but decided to pitch to him after a 2-0 count. Burriss swung and missed and then fouled off a suicide squeeze attempt before flying out to shallow center.

Bourjos hit a sharp bouncer down the third-base line. David Wright made a backhanded grab but the speedy ninth-place hitter easily beat the throw and Galvis scored.

Players from Philadelphia's dugout ran out and jumped on him to celebrate.

The Mets hit 12 homers in the three-game series and have 19 homers in the past six games, all on the road. It's a franchise record for a six-game span. They hit back-to-homers in three straight games, also a franchise first. Duda and Walker connected in a row in lopsided wins Monday and Tuesday.

Lough's sacrifice fly gave the Phillies their first lead in the series, 3-2, in the fourth. Cespedes then launched his fifth homer in the fifth and Duda followed with a towering shot off a video board in right field to give the Mets a 4-3 lead.

The Phillies tied it in the seventh when Bourjos singled home Lough with two outs.

Asdrubal Cabrera put the Mets up 1-0 on a ground-rule double that appeared to be a three-run homer. Cabrera trotted around the bases when his high drive to right ended up in the stands. But a video review showed the ball bounced off a fan's glove and landed in another fan's hands.

Walker returned to third base after the replay and then scored on a wild pitch to make it 2-0.

The Phillies quickly answered in the bottom half. After Carlos Ruiz hit a single, Galvis hit an opposite-field shot to left-center to tie it at 2-2.

Mets: Fell to 7-7 with first loss in four games.

Phillies: Improved to 7-9 with second win in six games.

David Wright was 0 for 6 with four strikeouts.

Hellickson became Philadelphia's first starting pitcher to bat eighth or anywhere but ninth since Hall of Famer Steve Carlton on June 1, 1979, according to STATS. Before that, Bucky Walters was the last to do it when he hit eighth against the Pirates on Aug. 31, 1937.

The Mets struck out 17 times. Hellickson had six and reliever Hector Neris had six in 2 2/3 innings.

A fan wearing a No. 34 Mets T-shirt and a glove dropped a pop-up in the first row behind Philadelphia's dugout. Fans booed.