Bradley Beal to re-sign with Wizards 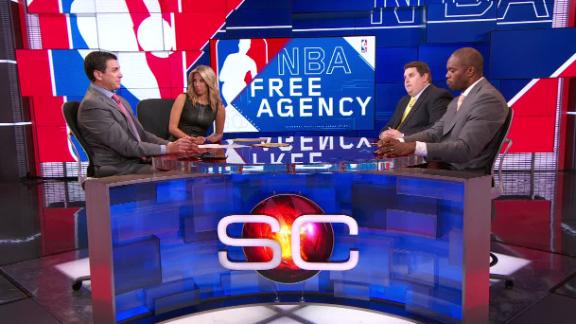 The Washington Wizards have agreed to a deal with Bradley Beal, according to Beal's agency Priority Sports and agent Mark Bartelstein.

"Brad and his family could not be more excited about the commitment the Wizards have made," Bartelstein told ESPN's Marc Stein.

Earlier Friday, ESPN reported that the Wizards and Beal were near an agreement on a maximum five-year contract approaching $130 million. Sources told ESPN the sides moved swiftly into contract negotiations when free agency began at 12:01 a.m. ET on Friday.

A deal can't be signed until the league-wide moratorium on signings and trades is lifted July 7, but parties are allowed to strike a verbal agreement before then.

Beal played in a career-low 55 games (35 starts) for the Wizards last season due to injuries, including a stress reaction in his right fibula. He has dealt with a number of injuries over the course of his four-year career and has never played more than 73 games in a season.

The 23-year-old averaged a career-high 17.4 points per game last season as he and John Wall formed one of the top backcourts in the NBA.

The shooting guard turned down a lucrative contract extension from the Wizards before the 2015-16 season, saying he felt he is worth a maximum contract.

"I feel like I'm a max player, and that's what I'm looking for. If Washington can't meet that requirement, then I may be thinking elsewhere," Beal told The Washington Post in late May. "I'm pretty sure that they probably won't [let me go]. At the end of the day, that's where I want to be. I think a deal will probably get done, but you just never know."

Information from ESPN's Jeff Goodman and Ian Begley was used in this report.