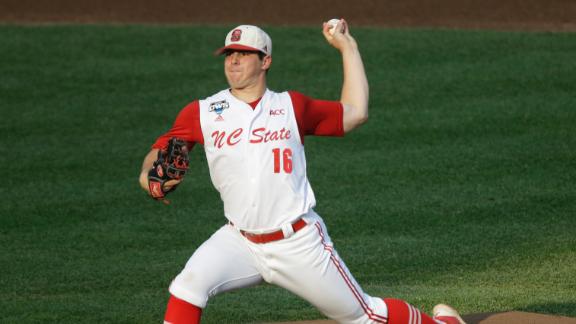 Brady Aiken, the hard-throwing lefty who didn't sign after being last year's No. 1 draft pick by the Houston Astros, announced Thursday he had Tommy John elbow surgery.

The 18-year-old Aiken was pitching for the IMG Academy, a private training institute in Florida, to prepare for this year's draft after a contract dispute with the Astros left him unsigned. In an essay published Thursday forThe Players' Tribune, the website created by Derek Jeter, Aiken broke the news himself.

"I'm obviously extremely disappointed," Aiken wrote. "I wanted to let my pitching speak for itself, but now there are going to be new distractions. For that reason, I wanted to be the one to tell people what's happened and make this a fresh start."

The surgery was performed by Dr. David Altchek on Wednesday.

Aiken, who attended Cathedral Catholic High School in San Diego, went first overall last June despite some concerns about his elbow. Aiken, perhaps the most polished high school pitcher in the draft whose impeccable control mesmerized the Astros, downplayed any issues. But he and Houston failed to agree to terms on a contract -- making him the first No. 1 pick to not sign since Tim Belcher in 1983, and third overall, also joining Danny Goodwin (1971).

Aiken, who initially committed to UCLA before going to IMG, wrote about knowing there were skeptics then -- and surely will be more now.

"I can honestly say I don't regret not signing," he said. "It was a very difficult decision, but it also was an informed decision based on circumstances only a few people know the truth about. My family and I planned for all the possible outcomes. We weighed the pros and cons, talked with friends and mentors and doctors whose opinions we value and discussed it over a number of family dinners. This wasn't a decision we made lightly."

Aiken insisted money wasn't the only factor in not signing with the Astros, but also cited being able to play somewhere he felt "comfortable" and establishing "a support system I felt would lay the groundwork for a successful and long career."

The left-hander wrote that the decision "made the most sense for my future," and he didn't dwell on it the last few months. Instead, he was preparing for this year's draft -- in which he was expected to be a first-round pick again. And, he still could be, despite the injury.

Aiken noted that two other pitchers were drafted after him in the first round last year despite still recovering from Tommy John surgery. East Carolina right-hander Jeff Hoffman went ninth to Toronto, and UNLV righty Erick Fedde was taken No. 18 overall by Washington.

Arizona has the No. 1 selection this year, while Houston holds the second pick as compensation for Aiken not signing, as well as the No. 5 pick. The Astros can't draft Aiken again without his consent.

Aiken realized something was wrong with his elbow during his first start last week at IMG. He wrestled with his emotions after he received the diagnosis that he tore the ligament.

"I can't even begin to express how I felt," he wrote. "I was -- and still am -- overwhelmed with a lot of different feelings, but mostly it's disappointment. I won't be able to pitch this season, and this is going to keep me from doing what I love most of all: competing."

Aiken mentioned that it's "frustrating" that he won't be able to pitch -- or surf at home in California this summer. But, he also insisted that this "is just a temporary setback" for him.

"I already have a plan in place to rehab my arm, and I plan to come back better than ever," he said. "I also know God has a plan for me. Injuries are part of the job, but so is coming back. I can't wait to get back on the mound. I can't wait to compete again."