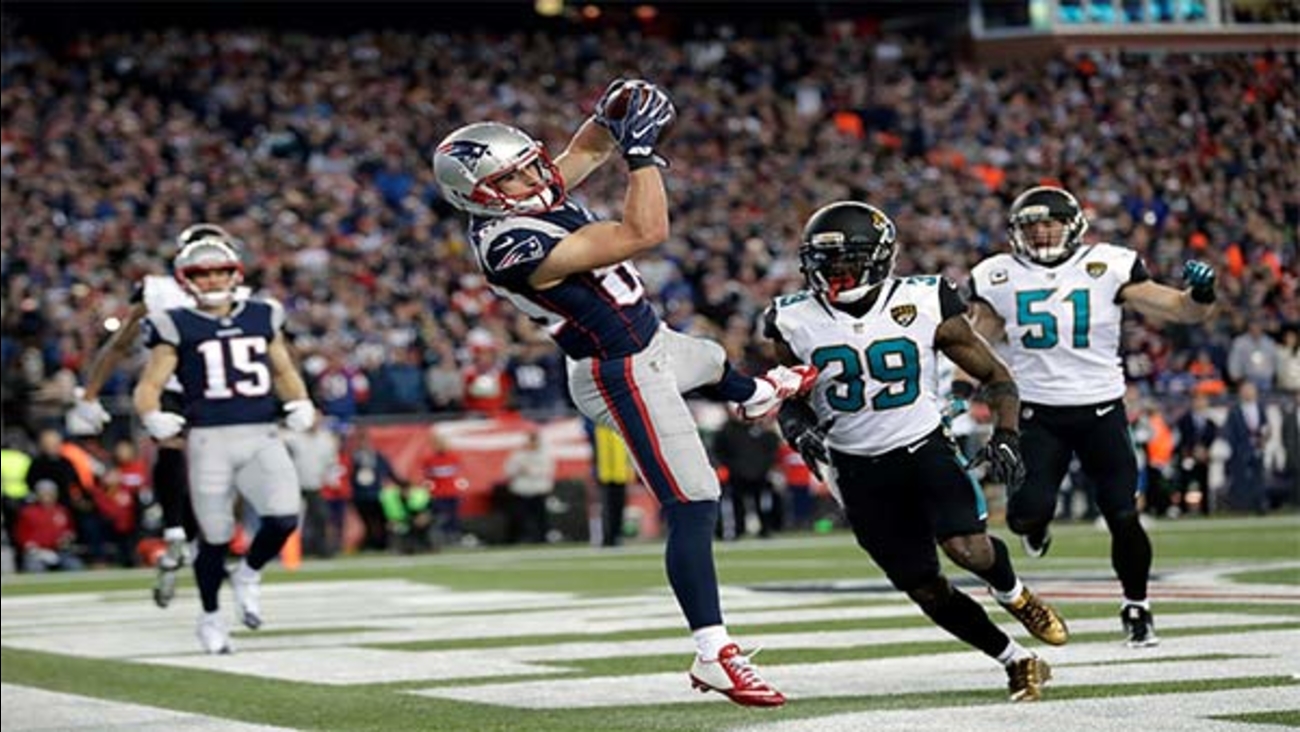 FOXBOROUGH, Mass. -- Give 'em a hand: Tom Brady and the New England Patriots are heading back to the Super Bowl.

Brady shook off a hand injury and threw a 4-yard touchdown pass to Danny Amendola with 2:48 remaining, rallying the Patriots to a 24-20 comeback victory over the Jacksonville Jaguars in the AFC championship Sunday.

Brady, wearing a black bandage on his right hand after hurting it during practice earlier in the week, showed no signs of being hampered.

And, with the game - and possibly the season - on the line, the Patriots star came up big again.

"I've had a lot worse," Brady said. "I didn't know that on Wednesday. It was a crazy injury. Wednesday, Thursday, Friday was a little scary. Then I started getting some confidence and today we did just enough to win."

Brady finished 26 of 38 for 290 yards and two touchdowns for the Patriots (15-3), who'll play the winner of Sunday night's game between Minnesota and Philadelphia in Minneapolis on Feb. 4.

It's the eighth Super Bowl appearance for Brady and coach Bill Belichick, who have won five times - including last year's 34-28 overtime rally against the Atlanta Falcons.

The Jaguars (12-7) led 20-10 early in the fourth quarter, but couldn't hold against the defending champions.

Jacksonville - looking to reach the Super Bowl for the first time in franchise history - had one more shot, but Bortles' throw on fourth-and-15 to Dede Westbrook was knocked away by Stephon Gilmore.

The Patriots then ran out the clock, with Dion Lewis' 18-yard scamper with 90 seconds remaining sealing the victory. And they did it mostly without tight end Rob Gronkowski, who left the game late in the first half and didn't return.

Brady's hand was the most-scrutinized body part in Boston since the quarterback's right ankle before the 2008 Super Bowl, and Red Sox pitcher Curt Schilling's right ankle tendon - the bloody sock - in the 2004 playoffs.

Brady was listed as questionable after he hurt his right hand during practice earlier in the week. He was limited Wednesday, sat out Thursday and was limited again Friday because of the injury.

That caused some panic among the Patriots faithful.

Turns out, it was nothing to fret about.

Brady came out for warmups without a glove on his hand, and he came out throwing. He completed his first six passes - including a 20-yarder to Amendola on fourth-and-1 from the Jaguars 30 - for 57 yards to march the Patriots down the field. The drive stalled when Brady was sacked by Dante Fowler Jr., and New England settled for Stephen Gostkowski's 31-yard field goal.

A wide-open Marcedes Lewis gave the Jaguars a 7-3 lead 45 seconds into the second quarter with a 4-yard touchdown catch from Blake Bortles, who was 5 for 5 for 66 yards on an impressive and efficient seven-play, 76-yard drive.

Leonard Fournette gave Jacksonville a 14-3 lead midway through the second quarter with a 4-yard TD run, hushing the crowd at Gillette Stadium.

The Jaguars made some big mistakes that hurt them just before halftime. Bortles completed a 12-yard pass to Lewis on third-and-7 from the Patriots 44, but Jacksonville was called for delay of game - after New England called a timeout.

That wiped out a first down, and Bortles was sacked by Adam Butler on the next play to force a punt.

With just over two minutes left before halftime, New England's offense took over and the fans chanted "Bra-dy! Bra-dy!"

And their quarterback delivered - with some help from the Jaguars on two long penalties.

On first-and-10 from the Patriots 40, Brady threw a long pass for Gronkowski, who was injured when he got popped by Barry Church just as the ball was arriving. Church was called for unnecessary roughness, putting the ball at Jacksonville's 45.

A.J. Bouye was called for pass interference on the next play on an incomplete throw for Brandin Cooks. The 32-yard penalty put the ball at the Jaguars 13. After a 12-yard catch by Cooks, James White ran it in from the 1 to make it 14-10 with 55 seconds left.

Josh Lambo gave Jacksonville a 17-10 lead 4:37 into the third quarter with a 54-yard field goal. He added a 43-yarder 8 seconds into the fourth quarter to make it a 10-point game.