Brett Brown: I treat film study with Markelle Fultz like a 'college classroom' 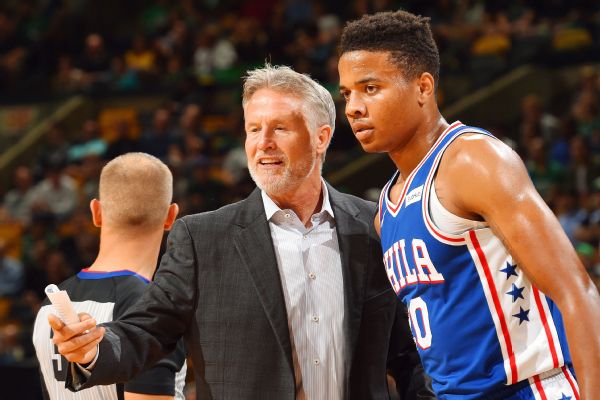 CLEVELAND -- Philadelphiaguard Markelle Fultz might have left the University of Washington for the NBA after just one year, but Sixers coach Brett Brown says the No. 1 overall pick's classroom education is continuing while he is sidelined with a shoulder injury.

"Really just sitting down and watching lots of film and playing sort of the Jon Gruden quarterbacks school is the analogy that makes the most sense to me, that might make sense to everybody here," Brown said before the Sixers' 105-98 loss to theCleveland Cavaliers on Saturday night.

Gruden is the former NFL coach and current Monday Night Football analyst who has a popular segment on ESPN in which he invites some of the top college quarterbacks entering the NFL draft to ESPN's Wide World of Sports Complex in Orlando, Florida, for a skull session.

Brown -- who has had to find ways to engage several of his team's top picks the past several seasons, as Nerlens Noel, Joel Embiid,Jahlil Okaforand Ben Simmons all missed extended periods because of injury -- sees the film study as a chance for Fultz to improve his mind while his body keeps him off the court.

"It's like, 'What do you see? What do you think? Why do you think that?' And you treat it like it's a college classroom," Brown said. "Then you get him on the court, and you do things that can improve his skill but not beat up on his shoulder."

The Sixers announced Saturday that Fultz, who has been out since late October because of soreness in his right shoulder and a scapular muscle imbalance, is no longer experiencing shoulder pain and will be evaluated in three weeks.

The Sixers said Fultz, who has played in only four games this season, will ramp up his basketball activities in the interim.

"Just the fact that he's feeling better is a positive," Brown said. "The duration that they expect it will take for him to get back on the court hasn't caught me off guard, and I'll look forward to taking that period of time and just doing what we've been doing with Nerlens and Jahlil and Ben and Joel and making it work where you can take that downtime and still improve."

When the 19-year-old played, he resisted jump shots while relying almost exclusively on drives to the basket. He is shooting 33 percent (9 of 27) from the floor and 50 percent (6 of 12) from the free throw line for the season. Off the bench, he has averaged 19 minutes.

"That's a slippery slope at times," Brown said. "He's had a great motor in trying to grow his conditioning in that regard, doing the same thing in the weight room. Picking the areas that you can continue to develop really an amazing basketball body."

The coach said one area in which the team has felt comfortable going "overboard" when it comes to Fultz's development is managing his diet.

"Like, really paying attention to educating him on the sleep and the food and the hydration, all that type of stuff," Brown said. "It's a holistic program, and it's not like everybody is confused on how to treat this time. We've had lots of practice at it, and I think that he'll come out better for it, in a twisted way, for the time that we've been able to give him when he just can't play NBA basketball."
Report a correction or typo
Related topics:
sportsespnmarkelle fultzjoel embiidjon grudenskull sessionsphiladelphia 76ersfilmnbamonday night football
Copyright © 2021 ESPN Internet Ventures. All rights reserved.
TOP STORIES
Firefighter killed, other first responders injured in crash on I-76
New legislation would require women to sign up for potential draft
LeVar Burton taking over as 'Jeopardy!' guest host Monday
Police ID man charged with murder after shooting at Pat's Steaks
Black car buyer's experience marred by dealer's 'racist' Facebook post
AccuWeather: Another beautiful day!
2 teens shot, 1 critical in Northeast Philly: Police
Show More
Search for bodies concludes at FL condo collapse site
Radio host changes tune on vaccinations after hospitalized with COVID
Arrest made after hidden camera found in KOP mall dressing rooms
Video: Yorkie attacked by coyote fights back, protecting young girl
Bumble match turns in Jan. 6 suspect who allegedly whipped police
More TOP STORIES News