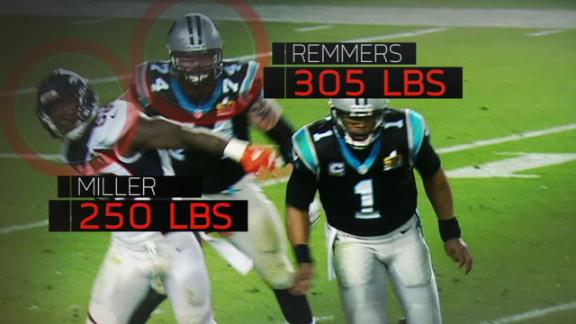 SANTA CLARA, Calif. -- There was nothing different and nothing exotic about what the Denver Broncos' defense did to Cam Newton and the Carolina Panthersin Super Bowl 50, Broncos linebacker Von Millerinsisted.

It was just brutally timely and efficient.

Miller was at the center of the storm for the Broncos, and he was the game's MVP after racking up 2.5 sacks of Newton, including two game-changing strip-sacks that first set the tone, then sealed the Broncos' 24-10 victory at Levi's Stadium.

"In all honesty, we came into the game wanting to play our defense," Miller said. "We knew if we were to be consistent and play [our] style of defense that we'd be able to come out on top."

Although Miller finished with six tackles (his 2.5 sacks were for a combined 27 yards), two quarterback hits, a pass defended and the two forced fumbles, he credited his teammates.

"If I could cut this award, I would give it to DeMarcus [Ware] and [Derek] Wolfe and all the other guys," he said. "That's what I would do. This is all great and stuff, but for me, I want to be with my guys.

Miller's strip-sack of Newton in the first quarter gave the Broncos their first touchdown and the Panthers their first of four turnovers. Defensive lineman Malik Jackson recovered the football in the end zone to give Denver a 10-0 lead.

Later on, Miller's strip-sack of Newton in the fourth quarter set the Broncos up for their final score, with safety T.J. Ward jumping on the ball at the 9-yard line with just over four minutes to play. Four plays later, C.J. Wilson pounded in for a 2-yard touchdown.

"He's tremendous, but we expect nothing less," defensive lineman Antonio Smith said of Miller. "He's one of the most dynamic pass-rushers in the league. When he turns it on and he's healthy, nobody's going to stop him."

Truly, the most recent time Miller and Newton were this close -- both symbolically and physically -- was on draft night in 2011, when Newton went No. 1 overall to the Panthers and Miller No. 2 to the Broncos.

Since then, Miller has dealt with a six-game suspension for violating the league's drug policy and has come back from a torn anterior cruciate ligament, both in 2013.

"He's a hell of a player, but he has become a great pro, a great man and a big leader on this football team," Broncos coach Gary Kubiak said. "[I'm] very proud of everybody but especially proud of him."

Miller is the 10th defensive Super Bowl MVP and the second in three years, with linebacker Malcolm Smith winning the award two years ago with the Seattle Seahawks.

"[Newton's] cadence is definitely one of the hardest to get down in the National Football League. We just keyed in. That's the type of defense we've been playing all year long."

Von Miller, Broncos stay true to their style
Broncos LB Von Miller reacts to winning the Super Bowl MVP award, saying he'd like to split it with other members of Denver's defense.