Broncos to start Peyton Manning at QB in playoffs 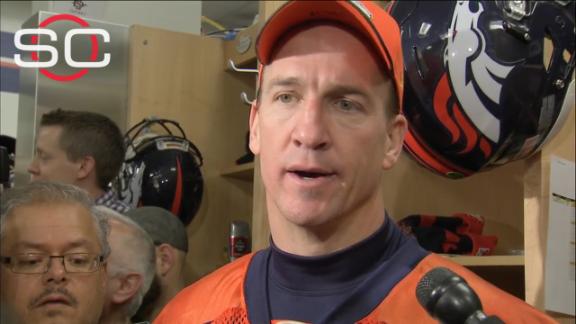 Manning, who missed six consecutive starts because of a tear in his plantar fascia near his left heel, was used for 29 plays in relief of Brock Osweiler in Sunday's regular-season finale and led the Broncos on four scoring drives in the 27-20 victory.

"I'm just looking forward to being able to contribute," Manning said Thursday. "No issues coming out of the game Sunday."

Kubiak said Monday he had "no timeline" to name a starter for the Broncos' Jan. 17 playoff opener, but many of the players had hoped to hear a decision Thursday, when they returned to work after three days off.

Kubiak told the two quarterbacks of his decision, then told the team in a morning meeting.

Osweiler was 4-2 as a starter and a key contributor to the Broncos' earning home-field advantage in the AFC in Manning's absence.

"It's a bit of a disappointment," Osweiler said Thursday. "It's hard to hear you're not going to be the one playing. ... However, I'm a big team player.

"You're going to see the same exact guy out of me that you've seen, you know, the whole season. Bottom line: I just care about this football team winning games. And if Coach thinks Peyton gives the team the best chance, then I fully support that."

Kubiak has said repeatedly that he has conveyed to both quarterbacks that the Broncos "will need everybody" in the postseason.

Earlier this week, Kubiak said "there's always going to be tough decisions to make" but that he was "going to always go with what's best for the football team."

"I feel really good about this," Kubiak said Thursday. "I feel good about how far Peyton has come, where he's at physically, mentally, everything. I could see it happening the last two weeks. I'm excited for him to get going."

Manning was 5-of-9 passing for 69 yards and led the team on four scoring drives -- two touchdowns, two field goals -- against theSan Diego Chargerson Sunday. The Broncos rushed for a season-best 210 yards in the game.

"I wouldn't have told Coach Kubiak I was ready to dress out last Sunday had I not felt good," Manning said Thursday. "I felt like I put it through a lot of tests during my rehab and tried to really test it, so I felt good going into the game Sunday, had no issues coming out [of the game]."

The game was Manning's first action since being removed from the team's Nov. 15 loss to the Kansas City Chiefs, and it was the first time since 1994, when he was a freshman at the University of Tennessee, that he was in uniform as a backup quarterback in a game.

"I knew he still had it," wide receiver Demaryius Thomassaid after Sunday's game. "It was a matter of giving him an opportunity to get healthy."

"I've just never been through anything like that before," Manning said. "I've played every single game that I've been in football except for four years ago [when he missed the 2011 season while recovering from a neck injury]. I don't really know what can prepare you for something like this. It felt like I hadn't played in a little bit.''

The Broncos practice Thursday, Friday and Saturday before resuming their usual game-week schedule next week.

Denver plays in the AFC divisional playoffs on Jan. 17 against the lowest remaining seed from Saturday's wild-card games -- either the Pittsburgh Steelers, Chiefs or Houston Texans.

Peyton: 'I'm looking forward to being back'
Broncos QB Peyton Manning addresses how it feels to be named the starter for Denver's divisional-round matchup and how his foot is feeling; he also praises QB Brock Osweiler for putting the team in position to earn a bye week.