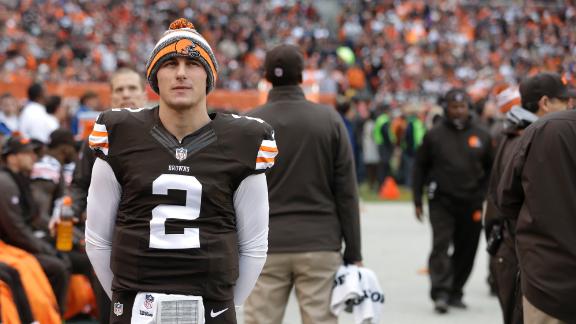 BEREA, Ohio -- The Cleveland Browns will stand by Johnny Manziel as he continues his treatment in rehab, owner Jimmy Haslam said Wednesday.

"I think it's way too early to give up on Johnny," Haslam said during a meeting with the team's beat writers. "We certainly haven't given up on him."

Haslam credited Manziel for what he did.

"I applaud him for raising his hand and saying 'I need help,'" Haslam said. "We're going to do everything we can to support him. Our primary interest is making sure that he gets well, if you will. Fixes himself.

"However long that takes, we're going to stand beside him. We hope Johnny can get that straightened out because we feel he's a really good athlete and can help our team. But the first thing he's got to do is get himself fixed."

Giving up on the quarterback after one tough season is "way too harsh," Haslam said.

Haslam's support of Manziel comes amid speculation that the Browns could attempt to make a play to draft Oregon quarterbackMarcus Mariota.

Mariota is currently being coached ahead of the combine by Kevin O'Connell, who has been hired to be the Browns' quarterback coach following his pre-combine commitments.

That has raised questions about whether the Browns are gaining an unfair advantage by hiring a coach who is working individually with Mariota.

"I can see why they would say that. Let me say this. We didn't hire Kevin because he's training Marcus," Haslam said. "We didn't hire him because he trained Johnny last year. We hired him because -- and I've never met Kevin, let me say this -- but our people, particularly [coach Mike Pettine], think he's a very, very smart, competent offensive/quarterback coach. So I think it's important to understand that's why we hired him. OK?

"He is not under contract. OK? He has an obligation to train Mariota until I think about a week from now, and then hopefully he'll come to work for us. But there's nothing more than that, and that's as transparent as I can be."

Manziel had a rocky rookie year that ended with the Browns being shut out 30-0 in his first start and then him missing the final Saturday of work. Manziel was told to stay in the locker room during the team's finale in Baltimore.

Shortly after the season ended, Manziel was photographed in Miami Beach, Houston and Aspen, enjoying the nightlife in each locale.

"The spotlight on him is phenomenal," Haslam said. "Some he brought to himself, some of it part of the persona of Johnny Football. I hope to heck he can get himself straightened out."