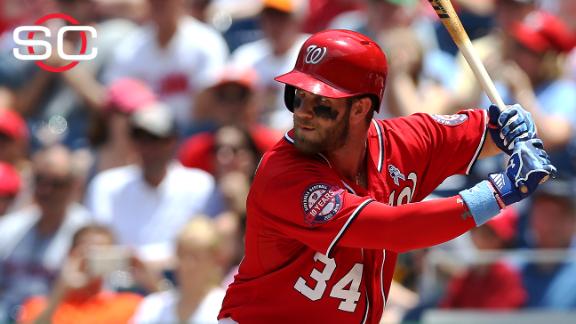 Washington Nationals outfielder Bryce Harper is taking the night off before he plays in the All-Star Game. He told reporters Monday that he will skip the Home Run Derby.

Harper had been invited to participate in the Derby for the second time.

One reason Harper passed on the event is his father's recent surgery. Ron Harper pitched for Bryce Harper in the 2013 Home Run Derby, in which Bryce finished second to Yoenis Cespedes. Ron Harper had rotator cuff surgery after a snowboarding accident.

"Not having my dad throwing to me is a big issue for me," Harper said, adding that his father "throws strikes" and knows where his "sweet spot" is.

The fourth-year veteran has 25 home runs this season, tied with Todd Frazier and Albert Pujols for second in the majors behind Giancarlo Stanton (27).

Harper led all National League players in being voted to his third All-Star team, which was announced Sunday. He received 13.9 million votes. This is the second time Harper has been named a starter.

He said he hopes to participate in the Home Run Derby again in the future, after his father recovers from the operation.

Pederson, who is tied for fifth in the National League with 20 home runs, was selected in the players' vote, the league announced Monday.

"I think that's probably the only reason I'm in the All-Star game is I have some home runs, but I think it'd be fun," Pederson said. "I've never been in one before."

If he participates, Pederson said Johnny Washington, his rookie ball hitting coach, would throw to him.

All-Star events will be held July 12-14 at Great American Ball Park in Cincinnati.