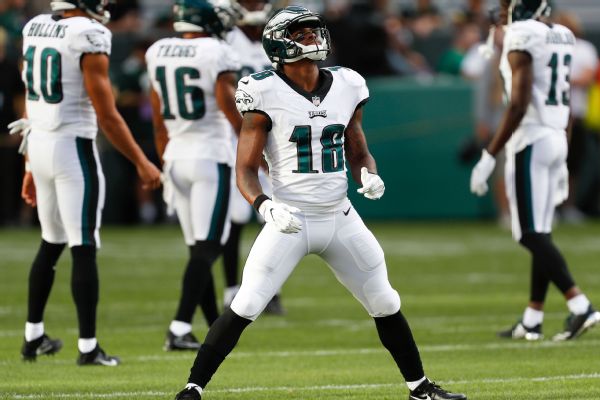 PHILADELPHIA --Eagles wide receiver Bryce Treggs revealed that he has been fined $25,000 by the NFL, presumably for his high hit on Green Bay Packers defensive back Damarious Randall during Week 1 of the preseason.

Randall took a shot to the head as Treggs went high with a block during a 3-yard LeGarrette Blount run in the first quarter. Randall suffered a concussion on the play and let Treggs know via Twitter that he thought the receiver's hit was dirty.

Treggs was not penalized on the play.

He later deleted the tweet about the fine but clarified his position on the play in a pair of tweets.

Treggs also retweeted a post of his from Aug. 10 in which he wished Randall well.

Treggs said Tuesday that the two have not communicated any more since then.

"He's obviously feeling some type of way so I'm just going to drop that and let that go," said Treggs. "When stuff like that happens I normally leave that on the field, so I'll leave it at that."

Treggs told ESPN that he plans to appeal the fine.

On another play, Packers rookie wide receiver Malachi Dupre had to be taken off the field on a gurney during the fourth quarter after he was hit by Eagles safety Tre Sullivan at the end of a 3-yard reception. Dupre, a seventh-round pick from LSU, gave a thumbs-up as he was wheeled away by paramedics and taken to the hospital for further evaluation.Before the game ended, the Packers announced that Dupre had feeling and movement in all of his extremities. He spent the night in the hospital for observation and tests and was released the following day.

The Packers submitted videos of both hits to the NFL for review.

"If I turned them into the league, I don't think they're legal hits," coach Mike McCarthy said.