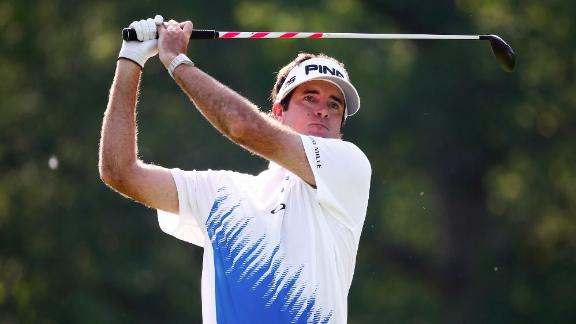 DUBLIN, Ohio -- Bubba Watson has been coming to Muirfield Village ever since his rookie year on the PGA Tour. Nine years later, he might have finally figured it out.

He had only five rounds in the 60s in his previous eight trips. Even with a bogey on his final hole Saturday, he had a 3-under 69 for his third straight round in the 60s this week. Watson is 11 under on the par 5s, the key to scoring.

Best of all, he walked off the course with a one-shot lead over Scott Langley in the Memorial. Not bad for a guy who has never finished better than a tie for 23rd.

Watson was at 12-under 204 and in position for his third win of the year.

"I have a shot," Watson said. "I'd like the same score tomorrow and let the boys beat me if they can beat me."

Plenty of them should have a chance. With a bogey on the final hole, Watson's lead shrunk to one shot over Langley, who had a 67 to make it an all-southpaw final pairing Sunday. Langley has not been in the final group since his rookie debut two years ago in Honolulu.

The most famous Lefty, Phil Mickelson, had a 72 and was 10 shots out of the lead while coping with reports he is involved in a federal investigation of insider trading. Mickelson confirmed that FBI agents approached him after the first round this week. Otherwise, he went about his business on the golf course.

"It's not going to change the way I carry myself," Mickelson said. "Honestly, I've done nothing wrong. I'm not going to walk around any other way."

Hideki Matsuyama of Japan made birdie on his last hole for a 69 and was two shots behind. Adam Scott, the No. 1 player in the world and coming off a win at the Colonial last week, made eagle on the 15th that sparked another surge up the leaderboard. With a bogey on the last hole, he had a 68 and still was only three shots behind.

"It's going to be tough," Scott said about his three-shot deficit to the Masters champion. "He's playing great this year, and I just have to post a number. I'm in a good position where I can possibly post a number, and that makes life a little harder for the leader."

The 36-hole leader had a tough enough time. Paul Casey, who started Saturday with a three-shot lead. That was gone in three holes when Watson made a pair of birdies, and Casey missed more than his share of putts that keep rounds together. He ended with a double-bogey for a 76. He still was in range, however, part of a large group at 8-under 208 that included Jordan Spieth (67), Charl Schwartzel (67) and Byron Nelson winner Brendon Todd (69).

Watson already has won at Riviera and Augusta National this year. He has tried to make it a point of keeping golf fun -- Bubba Golf, he likes to call it -- instead of getting wrapped up in expectations.

His performance on the par 5s took a slight hit on the 11th hole when his drive found the water, he chose to lay up because of the front hole location and missed his 12-foot par putt. He followed by missing birdie chances of 7 feet on the 13th hole and 3½ feet on the 14th hole, a chance to build some separation.

But he rolled in a 12-foot birdie on the 15th and was back in control until the 18th. Watson pulled his approach well right of the green, and his chip ran through the green and into the fringe against the collar. Using a fairway metal to chip, it appeared that the club moved his ball before the stroke, though Watson says he didn't touch it and television replays made it clear that the ball didn't leave its position.

Langley doesn't hit the ball as long as Watson. His game is about efficiency and control, and he has shown that by taking a streak of 40 straight holes without a bogey into the final round. Much like Watson, he saw the simple pleasures of a round at Muirfield Village.

"Any time you shoot in the 60s here, pretty happy about it," Langley said. "Tough place."

Langley grew up in the Midwest and went to school at Illinois. He has played plenty in the Columbus area in college and says he "never cracked an egg" whether he was at the Scarlett Course at Ohio State or Scioto. The good news for Langley? Muirfield Village is in Dublin.

Watson Leads Memorial After Third Round
Bubba Watson holds a 1-shot lead after the third round of the Memorial Tournament.