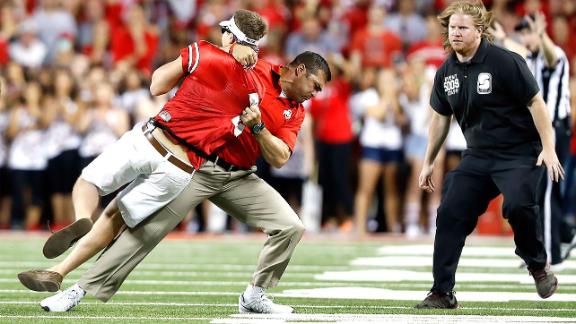 COLUMBUS, Ohio -- A student who ran onto the field during an Ohio State football game and was body-slammed by a coach is losing his scholarship amid his court case.

The sponsoring Western Golf Association, however, released a statement later in the day saying Wunder's Evans Scholars activities have been suspended but he remains on scholarship pending the outcome of its internal investigation.

"We are disappointed in Mr. Wunder's actions," the statement read.

The fourth-year engineering student is charged with misdemeanor criminal trespassing. His attorney entered a not guilty plea in Franklin County Municipal Court.

Wunder was stopped and slammed down by an assistant strength and conditioning coach Saturday during Ohio State's home victory over Cincinnati. The coach, Anthony Schlegel, is a former Buckeyes linebacker.

The hit has been a sensation on social media.

Coach Urban Meyer said he had a somewhat serious conversation with Schlegel about the hit.

"I appreciated him protecting our players," Meyer told reporters earlier this week. "[But] I'd rather him not have a lawsuit if something bad would happen, you drill a guy like that.

"So we had a partial-serious conversation. And we also gave him a 'Hit City' award, our team, and had a little fun with it, too."

Collins told The Columbus Dispatch that Wunder is doing well.

"He's working and focusing on day-to-day stuff and letting me handle this [legal] stuff," Collins said.

The attorney wouldn't say why Wunder ran onto the field or whether Schlegel's tackle was too hard.

According to Collins, Wunder won't talk to the media until the case is resolved.

Should Fan Who Ran On Field Have Lost Scholarship?
Jemele Hill and Michael Smith discuss the fourth-year engineering student who lost his scholarship after running onto the field during an Ohio State football game and was body-slammed by assistant coach Anthony Schlegel.