Buckeyes QB J.T. Barrett to lose financial aid for one term after arrest 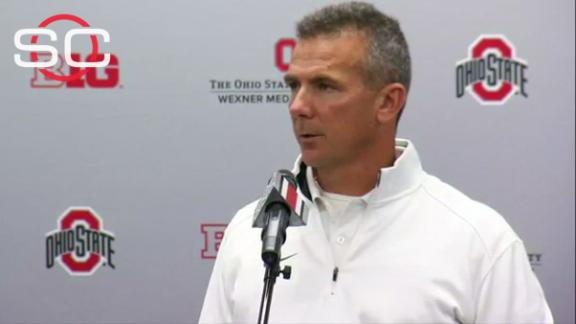 COLUMBUS, Ohio -- In addition to a one-game suspension, Ohio StatequarterbackJ.T. Barrettwill also lose hisscholarship for a term as part of his discipline for his arrest during the bye week, Buckeyes coach Urban Meyer said Monday.

Meyer said he reviewed the facts from the citation for operating a motor vehicle under the influence of alcohol and backing without safety. He was stopped at a Columbus police checkpoint early Saturday morning.

An Ohio State spokesman confirmed to ESPN that Barrett's financial aid would be forfeited for the 2016 summer term.

Barrett is on scholarship this fall and for the spring, and he will be on scholarship next fall as well. The punishment for the summer will only be relevant if he doesn't pay his own way. In that circumstance, Ohio State said he wouldn't be able to work out with the team or participate in the offseason conditioning program with supervision from the school.

Barrett, a redshirt sophomore, is scheduled for arraignment Friday for the misdemeanor charges, according to Franklin County records.

According to school policy, Barrett was not subject to any suspension as a first-time offender of the alcohol policy for underage students, but he will miss Ohio State's home game Saturday against Minnesota, once again thrusting Cardale Jones back into the starting lineup.

"I tried to collect as many facts as I could about what actually happened," Meyer said. "I meet with the player; I meet with [athletic director] Gene Smith. Obviously this was a very serious one. I came to the conclusion of one game, and he's also losing a scholarship, forfeiting his scholarship for a term.

"When a kid has an issue like that, there's some type of punitive damage."

Meyer handed out a similar punishment in 2012 when offensive lineman Jack Mewhort and tight end Jake Stoneburner were arrested on misdemeanor charges.

Taylor Decker, one of the Buckeyes' captains along with Barrett, said the quarterback called veteran players Sunday to apologize and then addressed the team as a whole Monday.

"I thought that was a really mature move by him," Decker said. "He knows he made a mistake. He'll accept that and he'll do what needs to be done to get back. We're just going to have to move on, get Cardale in there and get him ready this week.

Barrett will be eligible to return for Ohio State's road game at Illinois on Nov. 14, though Meyer offered no guarantee that he would reclaim his starting job moving forward.

Barrett is a widely respected leader for the Buckeyes and was voted a team captain in just his second season of action. Meyer, however, expressed his disappointment in Barrett but also vowed to support him.

"I love J.T.," Meyer said. "But J.T. is going to deal with something he's never had to deal with before. Now there is some question about who you are. ... 20 years of doing something right, 30 seconds of doing wrong.

"Disappointed it happened. We did what we did and we're moving forward."

Meyer addresses Barrett suspension
Buckeyes coach Urban Meyer explains his decision to suspend QB J.T. Barrett for one game after Barrett was arrested on charges of operating a vehicle while intoxicated. Barrett will also lose his scholarship for a term.