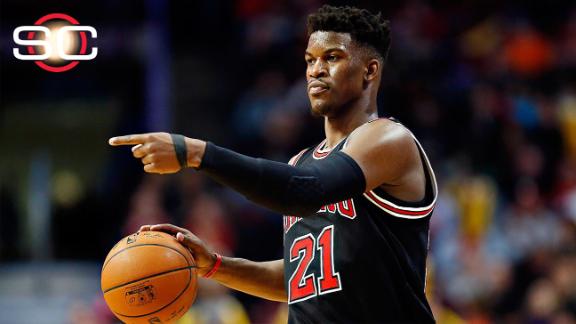 Butler was the runaway winner in the voting process, garnering 92 of a possible 129 first-place votes from a panel of media members. He earned 535 points in total, with Golden State Warriors forward Draymond Green finishing as the runner-up with 200 points, including 11 first-place votes. Utah Jazz center Rudy Gobert came in third with 189 points and 12 first-place votes.

"It's a testament to his work ethic and what he's done," Bulls coach Tom Thibodeau said. "Each year he's gotten a lot better, and I think it's being recognized by a lot of people now. Where he is today and comparing that to where he was four years ago, he's made a gigantic jump."

The NBA will hold a news conference Thursday afternoon to give Butler the award. He will also be honored Friday with an on-court presentation at the United Center before Chicago's home matchup against Cleveland in Game 3 of the Eastern Conference semifinals.

He is also in line for a huge payday as a restricted free agent after he and the Bulls were unable to agree to a contract extension before the season. Butler said at the time that he was betting on himself, and it looks like he hit the jackpot.

Butler, however, called it "a tie" Thursday and insisted, "We both won."

After the Bulls' 106-91 loss in Game 2 on Wednesday night, Butler said he is focused on winning games rather than the award.

"I want to win this series, I want to win the championship, and at the end of the season, maybe that Most Improved award will mean a lot more," he said.

The award is the next step in a remarkable climb from homelessness as a teen to stardom in the NBA.

Butler got kicked out of his house by his mother when he was 13 in Tomball, Texas, and his father had been out of his life since he was a baby. At the time, Butler had no money and nowhere to go.

He would stay with friends for a few weeks and then move on to another one looking for a place to stay. He eventually settled in with the Lambert family and became a star at Tomball High.

Butler went on to Tyler Junior College and spent three seasons at Marquette before getting drafted with the 30th pick by the Bulls in 2011.

"I felt like at any level I was at, whether it be junior college or Marquette, I don't think I was supposed to be there," Butler said. "Somehow, some way, with the people that were in my corner, I found a way to get there."

As a rookie during the lockout-shortened season of 2011-12, Butler played sparingly but impressed his teammates by how he defended big-name opponents. A smiling Joakim Noah brought up a 105-102 win over the Knicks on Feb. 2, 2012.

"I still remember that game against the Knicks, when they put him in the fire," Noah said. "He actually played very well against Carmelo [Anthony]. He was the difference-maker in that game."

Despite losing 17 games to injury, Butler hiked his scoring average this season from 13.1 points per game to 20.0 and became an Eastern Conference All-Star for the first time. He also raised his shooting percentage from 39.7 percent last season to 46.2 percent.

"When you watch what he's done throughout the career, from high school to college to the pros, each year he's gotten better," Thibodeau said. "Obviously he's very talented; you can't do what he's doing without being very talented. But he's also very intelligent and he's very driven.

"When you combine those three things, usually those type of players always improve."