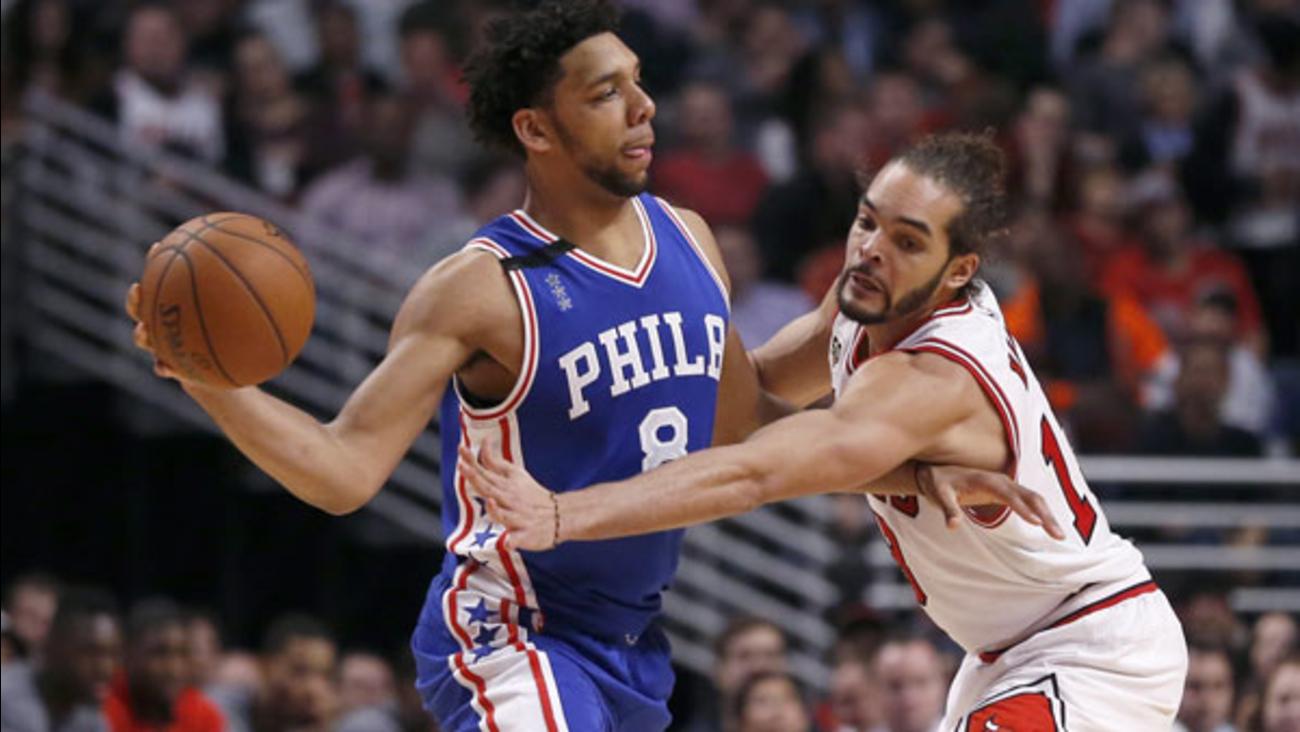 CHICAGO -- Jimmy Butler had 23 points and the Chicago Bulls rallied from a halftime deficit for a 115-96 rout of the lowly Philadelphia 76ers on Monday night.

Nikola Mirotic had 17 points and Tony Snell added 16. Joakim Noah had 15 rebounds and eight assists as the Bulls won their third straight.

After trailing by four at the intermission, the Bulls had a 64-40 advantage in the second half.

The 76ers drop to 1-25 and remain winless through 15 road games. Rookie Jahlil Okafor had 22 points in his first game as a professional in his hometown.

Robert Covington had 15 points and Tony Wroten 12 for Philadelphia.

The Bulls had a 24-19 edge at the end of the first quarter, but the Sixers grabbed a 56-51 halftime lead. Philadelphia made 16 of 25 shots in the second quarter.

Okafor had eight points on 4-of-4 shooting in the second quarter and had 16 points in 16 first-half minutes. Wroten added 12 points on 4-of-5 shooting before the intermission.

Chicago, though, quickly dashed hopes for an upset early in the third quarter. The Bulls dialed up the intensity and made Philadelphia look like a one-win team.

After committing just two turnovers in the first half, the Sixers had six in the first 6:34 of the third quarter. By then, the Bulls had claimed a 69-62 advantage and things only got worse for Philadelphia.

Chicago had an 85-68 lead entering the fourth - thanks to a 34-12 edge in the third - and Mirotic had a 3-pointer to open the scoring in the final quarter to make it a 20-point game.

Snell led the Bulls with 12 points on 4-of-5 shooting in the third. Okafor was limited to two points.

Besides seven turnovers in the quarter, the Sixers were just 5 for 21 (23.8 percent) from the field.

76ers: C Nerlens Noel missed the game with a corneal abrasion of the left eye suffered on Sunday at Toronto. "It's not as significant as we guessed," coach Brent Brown said. "We don't expect him to play in Atlanta. We'll learn more about that. Evidently you learn more after 24 hours and it hasn't been that yet." The eye is sensitive to light so Noel didn't attend the game and stayed at the team hotel.

Bulls: C Joakim Noah, a former starter, has been leading the break to create more easy scoring opportunities for the second unit. "Our guys are doing a better job of running with him," coach Fred Hoiberg said. "Before it was pretty bunched up and different guys were running toward the ball. But since we put Jo in the middle of the floor as the facilitator, I've liked what we've gotten."