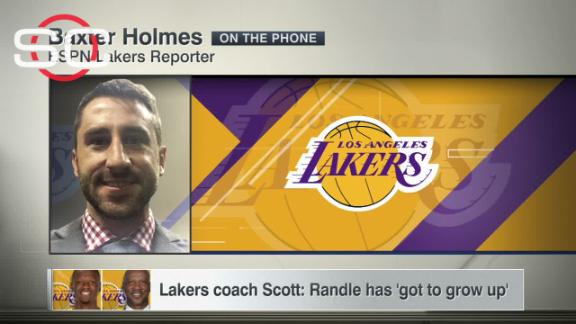 EL SEGUNDO, Calif. -- After Los Angeles Lakers forward Julius Randle was visibly upset at being taken out late in his team's blowout win over the Phoenix Suns on Sunday, coach Byron Scott had a message for the team's promising power forward.

"He's got to grow up," Scott said Monday after the Lakers' practice at their facility. "Simple as that."

Scott added, "I think the main thing I don't like is, when you take him out of a game, how he acts sometimes. But again, I chalk it up to immaturity and just being inexperienced at this level because it's going to happen again. I'm going to take him out of other games that he's not going to like."

Scott singled Randle out for playing poor defense in the Lakers' 97-77 rout of the Suns, the Lakers' third straight win. Randle left without speaking to reporters after the game.

"I don't think there was defense on the court at all in the fourth quarter, and he singled me out," Randle said Monday after practice. "I think it was a team thing."

The back-and-forth marked another bump in what has at times been a rocky relationship between Scott and Randle, the former Kentucky standout and No. 7 pick in the 2014 NBA draft.

Against the Suns, the Lakers led by as many as 38 points, but the Suns whittled that lead to 16 late in the game, at which point Scott began making substitutions. First, Jordan Clarkson entered the game for Marcelo Huertas, then Larry Nance Jr. for Randle, then Louis Williams for D'Angelo Russell.

Of all the players taken out late, Scott said Randle "took it probably the worst, and he's going to have to learn from it."

Randle was consoled on the Lakers' bench by veteran swingman Metta World Peace.

"I was frustrated I wasn't on the court. Simple," said Randle, who finished with two points on 0-of-4 shooting in 16 minutes, the fewest he had played since Oct. 30.

Randle defended his play by saying, "It wasn't like I was 0-for-25 or something. I took four shots. I still had 12 rebounds, still had three assists. I took what the defense gave me."

Scott said Randle's attitude at practice Monday was "OK" and added that Randle has "another chance" against the Golden State Warriorson Tuesday at Staples Center.

Along with rookie point guard Russell, the No. 2 overall pick in the 2015 draft, Randle was removed from the starting lineup Dec. 7 after starting the team's first 20 games. Nance was promoted to starter in place of Randle and has thrived lately. He is averaging 11.6 points and 10.4 rebounds in his past five games.

Scott said he doesn't think Randle is upset because Nance is playing so well.

"I mean, that's almost asking if he's jealous of Larry," Scott said. "I don't think so. One thing about Julius that I do know is that he wants this bad. He wants to perform. He wants to play well. Sometimes, you want that too bad, and you've got to relax and kind of just let the game come to you.

Nance said he is rooting for Randle as much as anyone.

"I want him to be an All-Star," Nance said. "I want everybody on this team to be the best they can be. So if I come out and he has a double-double, awesome. If he comes out and I have a double-double, awesome. Either way, I'm just trying to win. If he gives us the best chance to win, play him. If I give us the best chance to win, play me. I think, personally, we're a pretty cool duo, like a tag team. Tag me out and tag him in, and let's go."

Asked whether he is trying to regain his role as a starter, Randle said, "It's not my decision. I don't make those decisions."

During the team's first 20 games, Randle was averaging 11.7 points on 43.3 percent shooting from the field along with a team-high 9.2 rebounds in 28.4 minutes.

In terms of being patient, Randle said he takes it "day by day."

"You can't be frustrated all the time. You can't be happy all the time," Randle said. "Basketball is a game of ups and downs, emotions. Biggest thing is, you control your effort, how hard you play. You control getting better. That's what I will continue to do."