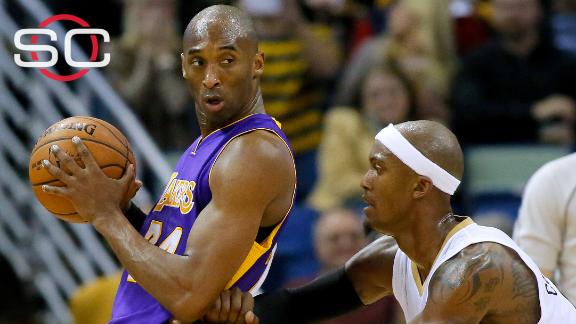 With an infusion of mostly young talent like No. 2 overall pick D'Angelo RussellandJordan Clarkson and the addition ofLou Williams, the Lakers used their summer league pairings to start experimenting with their lineup. And that might mean a change for Kobe Bryant.

"If we don't get another guard, then Kobe's in that mix," Scott said of a potential switch. "I'm kind of going through those scenarios. But not necessarily as far as who's starting and who doesn't. ... I think [Bryant] will play more 3 than 2. If we can get him at the elbows and at the mid-post, the more effective he'll be.

"I don't think he needs to be using up the whole 94-foot floor. If we can cut that down some, I think that saves his legs as much as possible. But if we can get him where he operates best, which to me is elbows on each area, top of the key, at the pinch post, at the mid-post, then I think he can be real effective for us."

Russell and Clarkson played long stretches together in Las Vegas, and Russell felt encouraged about sharing a backcourt with Clarkson.

"He seems like an easy guy to play with," Russell told ESPN.com. "He's a fast-paced guard, very up-tempo, and I'm the same. I'm not as light and fast as him, but I try to pass and keep it that way."

Scott said the franchise's goal through the draft and free agency was to become more versatile, and he thinks the team has accomplished that.

"Kobe can play 1, 2 and 3," Scott told NBA.com. "There's no doubt in my mind. And there's some games, against some teams, where he'll probably play 4. With his tenaciousness, the way he guards people and when his mind is set, if I say, 'Kobe, you've got him,' he takes that as a challenge. You know how he is. He'll compete."