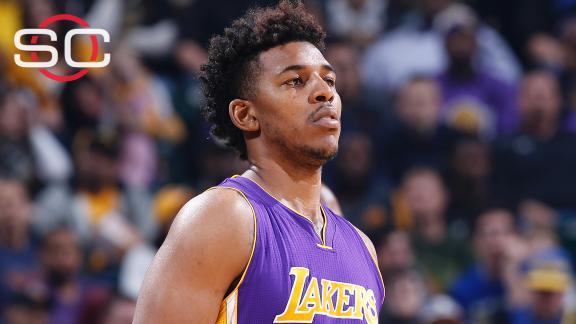 EL SEGUNDO, Calif. -- Los Angeles Lakers coach Byron Scott clarified his decision to bench forward Nick Youngforthe past 11 games on Monday. He said it "has everything to do with basketball," as well as Young's not being mentally present with the team, given the recent drama in his personal life.

"It has nothing to do with the chemistry," Scott said at practice Monday. "It has everything to do with just basketball. Right now, I know what he's going through, and I know it's hard on him. But he's not here with us, mentally, and there's no need for me to put him out there on the floor."

Scott placed Young on the inactive list before Sunday's 107-100 loss to the Boston Celtics. Scott saidhe views Metta World Peace as the more valuable player, and he understands Young is dealing with the fallout of a leaked video that teammate D'Angelo Russell secretly recorded of Young discussing women other than his fiancée, rapper Iggy Azalea, recently going public.

"I was thinking about that for the game last night -- who to put on the IR -- and my first thought was Metta [World Peace]. But then I said, 'I can use Metta,'" Scott said. "It was strictly a basketball decision. It's all based on because I know how [Young]'s feeling right now. He's not really here with us."

Before the video incident, Young and teammate Jordan Clarkson were dealing with a harassment claim levied by Alexis Jones -- an activist focusing on sexual assault and harassment, abuse and domestic violence among athletes -- and her 68-year-old mother on March 20 in Hollywood.

Despite his inability to connect from deep, Young's offensive role has been reduced to primarily attempting 3-pointers, as 63.7 percent of his field goals attempts have been from beyond the arc (his previous high was 47.3 percent last season).

Young's average shot distance has jumped to 20.9 feet this season (basically the longest 2-pointer possible and the least efficient shot in basketball), a stark increase from his career high of 18.7 feet last season, according to Basketball-Reference.com.

"It's been tough," Scott said. "This is probably the icing on the cake, as far as how tough it can be. He didn't get off to a great start. His shooting has not been what it has been in the past. It went even a little downhill the last couple of months.

"The situation last week didn't help. We all, as coaches, players and everybody, feel for him and understand the situation he's in. It's a tough situation."

Young's off-the-court distractions and resulting dip in production haven't translated to his effort in practice, though, as Scott has still been satisfied with Young's attitude and intensity.

"He's been coming to practice every day," Scott said. "He's here, and he's been doing what he needs to do. I have no problem with that whatsoever."

Although Scott wouldn't commit to keeping Young on the inactive list for the rest of the season, it seems unlikely that Young will play again this season.

Information from ESPN.com's Baxter Holmes contributed to this report.