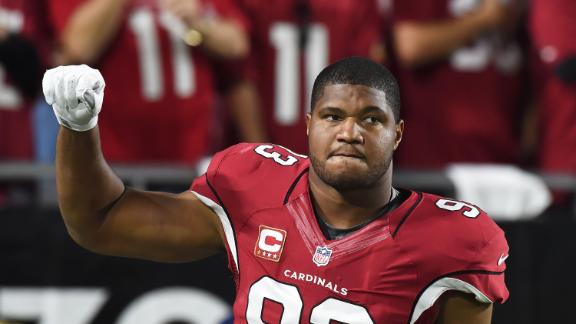 TEMPE, Ariz. -- Less than two months after receiving its largest donation from a former athlete, the University of Miami athletic department has received an even larger gift.

Arizona Cardinals defensive end Calais Campbell has given $1.6 million to the Hurricanes to establish an endowed scholarship for defensive linemen in perpetuity, it was announced Wednesday.

Campbell's donation topped the $1.5 million gift from former Hurricanes running back Ken Hunt in December. Miami will rename its defensive line room after Campbell, making him the sixth former Hurricane to have an area of the football offices named after him.

Campbell's donation, which he said was his first to Miami, helped the Hurricanes' athletic department surpass $106 million in its Momentum2 capital campaign.

The 28-year-old had been trying to figure out a way to help the Hurricanes and decided a scholarship was the best way to leave his mark. As a student at Miami, Campbell received an endowed scholarship, and he says he stays in contact with the donors, Robert and Connie McGee.

Campbell graduated in 2008 with a degree in advertising and marketing.

"I know how rare these jobs are," Campbell told ESPN.com of being an NFL player. "I want to make sure that every kid, especially at the University of Miami, understands the importance of having a good fall-back plan, something you would enjoy doing if the NFL doesn't work out for you.

"This is my way of showing it."

Campbell, who had seven sacks in 2014 while getting voted into his first Pro Bowl, was All-ACC in 2006, when he finished with 10.5 sacks, ranking ninth in Miami history.

"Calais is an incredible man and, along with his family, understands the importance of education and the impact a positive environment can have on a student-athlete," James said in a statement.

"It's kind of come full circle," Campbell told ESPN.com. "For me, it's a representation of just how much the school means to me and to be able to be a part of it."