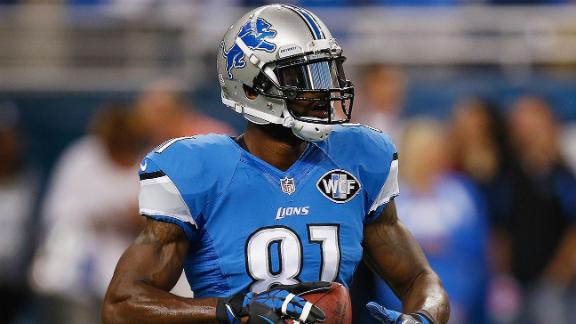 ALLEN PARK, Mich. -- Calvin Johnson didn't practice for a sixth straight day Friday, and while Jim Caldwell wouldn't say Johnson would need a miracle to play Sunday against the New Orleans Saints, the Detroit Lions coach didn't make it sound like his star receiver was going to play.

"I've been surprised before because he's an unusual guy," Caldwell said. "And just talking to him [Thursday] after practice, he's feeling good and coming along, so miracles have happened."

So did Caldwell mean it would take a miracle for Johnson not to miss his second straight game as he heals from a right high ankle sprain?

"It would probably be fairly close to that in some cases," Caldwell said. "But in this particular case, he's a little different guy. These guys have an unbelievable tolerance for pain. The recovery is quick and he's no different.

"When they take such great care of their bodies, you find the healing process happens a little bit quicker, as well."

On Wednesday, Johnson said he saw no reason to play until he was healed and ready to compete at a high level.

If Johnson doesn't play, the Lions will have to lean heavily on receivers Golden Tate, Corey Fuller and Jeremy Ross along with running backs Joique Bell and Reggie Bush.

This is in part because Johnson isn't the only Lions skill position player injured. Tight end Joseph Fauria continues to be out of practice as he recovers from an ankle sprain, and rookie tight end Eric Ebron has missed the past two days of practice after tweaking his hamstring on Wednesday.

"He's had a similar issue before," Caldwell said of Ebron. "It's just a matter of how quickly he's going to be able to rebound. So the doctors are still working with him and it's going to be day-to-day. He hasn't practiced since Wednesday. So hopefully he'll get back soon."

According to ESPN Insider Field Yates, the Lions brought in tight ends Kellen Davis and Richard Gordon for workouts Thursday but have not signed either one at this point. Caldwell indicated it would be tough for a tight end to sign this late in the week and then play Sunday.

"That's difficult unless he's a system-oriented guy, a guy that's been in it," Caldwell said. "Not too many guys out there like that. We are always trying to stay ahead a bit of an injury bug we've had from time to time. We've looked at a few guys and we kind of know where we need to go if we need to do so."

Calvin Johnson Could Miss Lions' Next Two Games
ESPN Lions reporter Michael Rothstein has the latest on Detroit WR Calvin Johnson, who may sit out the next two weeks to rest his high ankle sprain.