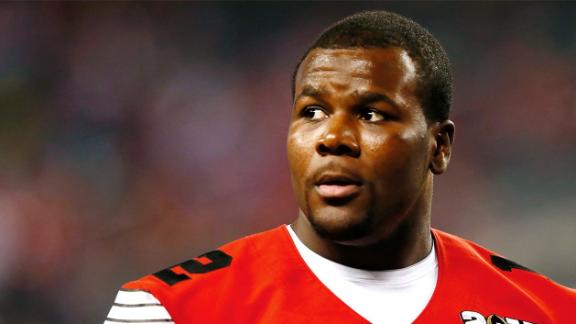 CLEVELAND -- As Drake's "Started from the Bottom" blared from speakers, local public figures in suits glad-handed and Cardale Jones emerged 15 minutes late in a gray "12 Gauge Buckshot" T-shirt, this was a spectacle that the quarterback admitted didn't have to be.

The national championship-winning QB is going back to Ohio State. At least some of the few hundred people inside Ginn Academy's auditorium expected the opposite.

"I don't know why you guys made such a big deal," Jones said jokingly, minutes after bypassing the NFL draft late Thursday, the deadline for NFL hopefuls to declare. "Like I said, it was very simple for me."

The 6-foot-5, 250-pound redshirt sophomore teased NFL draft enthusiasts with the announcement of a 4 p.m. ET news conference, and he warned on social media that a "life-changing decision" was looming. Logic said Jones would test the NFL, which, according to Jones, had second-round or late-first-round potential based on feedback from Ohio State coaches and Ted Ginn Sr., for whom Jones' high school was named.

Sure, Jones left money on the table. For comparison, a late-second-round quarterback from last year's draft, New England's Jimmy Garoppolo, got a contract with $1.1 million guaranteed and a bonus of $853,744.

Jones' name might never be hotter. He's fresh off a stellar three-game run through the Big Ten championship, Allstate Sugar Bowl semifinal and College Football Playoff National Championship Presented by AT&T, amassing 742 passing yards and six total touchdowns (one rushing) on the way to Ohio State's first title since after the 2001 season. Jones played in place of the injured J.T. Barrett, who played most of the regular season in place of preseason Heisman Trophy candidate Braxton Miller.

As of now, all are scheduled to return, which paints an explosive but muddled quarterback picture in Columbus.

Coach Urban Meyer, in an appearance on "The Late Show with David Letterman" that is scheduled to air Friday night, said nothing to clear it up.

"We're digging into some pretty serious stuff here," was all he would say when Letterman asked about the QB plans for 2015.

Ginn said a Thursday morning visit from Meyer and offensive assistants Ed Warinner and Tim Beck "meant a lot" to Jones. The visit lasted about an hour and a half, and helped Jones finalize his decision.

Jones wants to be an NFL quarterback but wants the "time to be right" -- he wants to be a college graduate first.

Ginn said the plan for Jones is to play one more year. Jones can earn his degree as a redshirt junior and technically would have another year of eligibility.

"After three games, [the NFL] was out of the question," Jones said. "A first-round draft pick means nothing to me without my education."

Then why hold a news conference if the decision was so clear-cut? The losing quarterback in the title game, Marcus Mariota, announced he was turning pro with a statement issued through theOregon Ducks. Jones admitted on Twitter, before the news conference, that it had been a "long two days."

"Just to be the example for our community and the kids that's around here," said Ginn, father of NFL veteran Ted Ginn Jr., on why Jones made the announcement inside his high school. "This is his hometown that he's proud of."

The NFL had limited game video on Jones, but his athleticism and arm strength, among other traits, could have placed him in contention for the third quarterback spot in the draft behind Jameis Winston and Mariota, both Heisman Trophy winners.

Now he returns to a lineup with no guarantees, but "a chance to compete," according to Ginn. Jones said Meyer was a "little shocked" when Jones told him he would be returning. Ohio State has three quarterbacks who could start for most power conference schools.

Meyer praised Jones' development in his interview with Letterman.

"[He is] an incredible case study of spirit and maturity level that he's come to," Meyer said. "You know, to think that he could bring us to a national championship, if you would have told me that two years ago, I would've disagreed with you."

Jones said Meyer has made no assurances that he'll be the starter but looks forward to changing that with his offseason play.

"Hopefully I am the starter," Jones said. "If I'm not, I have to wait for the opportunity to present itself."

Jones will be hard to leave on the sideline, Ginn says -- and not just because of his recent three-game stretch.

Jones doubts the Buckeyes can make it work with all three quarterbacks but added, "You never know with Urban Meyer."

Not everyone will understand Jones' decision.

Information from ESPN.com's Darren Rovell and Joe Schad contributed to this report.

Ohio State QB Jones To Return To School
Buckeyes QB Cardale Jones explains his decision to return to Ohio State and not enter the NFL draft.