Carmelo Anthony ejected for hitting Thabo Sefolosha in the head 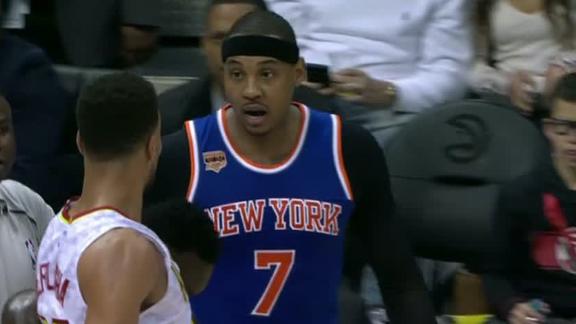 Carmelo Anthony was ejected in the second quarter of theNew York Knicks' 102-98 overtime loss to the Atlanta Hawkson Wednesday night after hitting Thabo Sefolosha in the head while the two were entangled in the paint.

Anthony was whistled for a flagrant foul 2, which resulted in an automatic ejection.

"He punched me," Sefolosha said after the game. "That was a fist right in my face."

It was unclear what -- if anything -- precipitated Anthony's run-in with Sefolosha.

Sefolosha received a technical foul on the play.

Anthony did not address the media after the game.

This is the second time this season Anthony has been ejected from a game. He was also tossed in the first half of the Knicks' Nov. 11 game against the Boston Celtics.

The Knicks lost that contest in Boston. They have generally struggled without Anthony in the past two seasons. New York is 0-11 since the start of the 2015-16 season in games during which Anthony sits.

According to ESPN Stats & Information data, since Anthony's rookie season in 2003-04, only three players have been ejected more times than his 10: Matt Barnes (13), DeMarcus Cousins (11) and Richard Hamilton (11).