Carmelo down to Knicks, Bulls 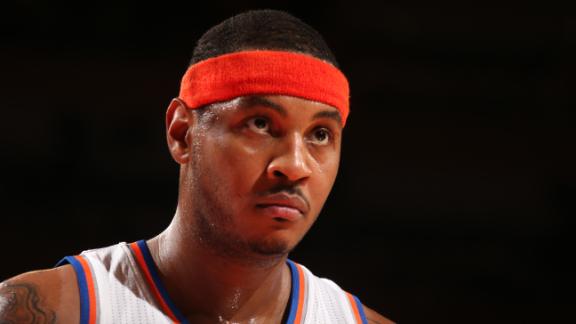 Carmelo Anthony has narrowed his options to the New York Knicks and Chicago Bulls, and is no longer considering the Los Angeles Lakers, sources told ESPN's Stephen A. Smith.

Knicks president Phil Jackson said Thursday that he hadn't heard from Anthony in recent days but remained confident the All-Star forward would re-sign with the Knicks. Jackson said the Knicks have made five different contract offers to Anthony, one of which is believed to be a maximum deal of $129 million over five years.

Knicks coach Derek Fisher seems to be on the same page as Jackson.

"I haven't heard anything different than that," Fisher said Friday after the Knicks started Las Vegas Summer League play with a 76-64 victory over the Dallas Mavericks. "We talked all this week about the fact that it's not our decision."

The first-time coach stressed that point.

"Decisions as free agents are never as easy as they seem," he said. "A lot of focus is on the contract size or the amount of money and the years, but oftentimes, guys are thinking on a much larger level."

"It's not just about basketball. Guys have wives, families, kids. Moving is tough."

As of Friday afternoon, the Lakers had yet to be informed they were out of the running for Anthony, a league source told ESPNLosAngeles.com's Dave McMenamin.

Anthony's agent, Leon Rose, told ESPN.com on Wednesday afternoon that his client "hasn't made a decision yet."

The Bulls can offer Anthony a contract starting at approximately $17 million. That number can increase if the Bulls acquire Anthony in a sign-and-trade.

The Knicks, whose maximum offer to Anthony would have a first-year salary of $22.5 million, hadn't shown any interest in participating in a sign-and-trade with Chicago as of late Friday night.