Carmelo on Hardaway: No problems 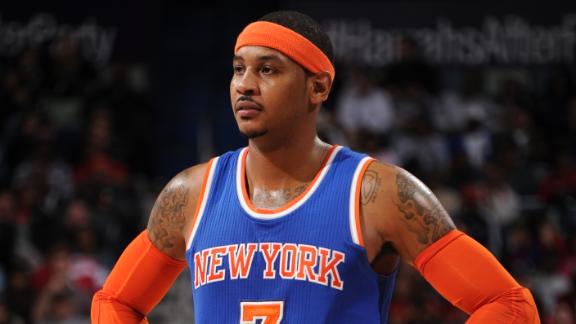 SAN ANTONIO -- New York Knicks teammates Carmelo Anthony and Tim Hardaway Jr. denied Wednesday that they have a poor relationship in response to a report earlier in the day by ESPN The Magazine's Chris Broussard.

Anthony and Hardaway confirmed that they argued during last week's loss to the Brooklyn Nets, but said the spat wasn't a reflection of their relationship.

"Me and Tim have no problems," Anthony said before the Knicks' 109-95 loss to the Spurs. ".... Tim is a guy who I always wrapped my arm around and put under my wing from day one, helped him through times when he's been down, and I will continue doing that."

Added Hardaway Jr.: "We're brothers. Brothers argue in the heat of the moment and then they make up. It's just that simple. I look at Melo as a mentor."

Nonetheless, the Knicks' frustration during this historically poor start to the season is palpable.

The team held a players-only meeting last Saturday at the team facility, a day before their loss to the Portland Trail Blazers.

"It was a very productive meeting. Everybody had a platform to say how they felt about what was going on," said Anthony. "It wasn't about the system or anything specific like that. It was about what we all can do to be better as a team and get over this hump."

The Knicks are mired in 10-game losing streak. At 4-20, they were off to the worst 23-game start in franchise history.

Broussard reported that some Knicks players have grown tired of the triangle offense and feel that it is fueling their struggles.

Anthony denied that he and his teammates are questioning the offense.

Anthony denied that any of his teammates told him during the players-only meeting that he was playing selfish basketball.

"Everybody had the platform to kind of speak their piece on what they felt about what's going on and how they can better the situation," he said. "But it wasn't no pointing fingers or anything like that or solely pointing me out to be the blame for what's going on."

Anthony sat out Wednesday's game due to lingering knee soreness. Guard J.R. Smith also missed the game due to a sore left heel.

Knicks coach Derek Fisher hopes that Anthony will return to the court on Friday against the Boston Celtics, but there is no specific timetable for his return at this point.

Anthony said the Knicks medical staff has told him his knee condition "won't get any worse, but it won't get any better. So it's just a matter of how much pain I can take while I'm out there playing ... Some days are better than others."

Anthony was asked if he had considered surgery to repair the knee ailment, which has been bothering him since the second game of the season. The Knicks star referred to surgery as the "last, last option."

"I'm not even looking forward to even discussing the surgery or anything like that," he said. "I'll explore as many other options as I can before I go under the knife and get surgery. We really don't know exactly what's the problem."