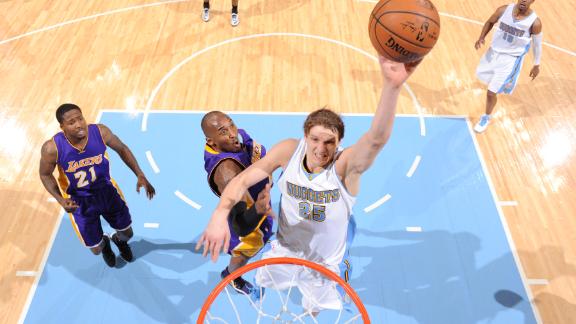 The Cleveland Cavaliers have acquired center Timofey Mozgov from the Denver Nuggets.

The Cavs, who have been in discussions with the Nuggets for Mozgov for months, are paying a steep price by sending two protected first-round picks to get the deal done. The Cavs will send a future pick they own from the Memphis Grizzlies from a 2013 trade and a first-rounder they acquired from the Oklahoma City Thunder earlier this week in a deal involving Dion Waiters. In addition to Mozgov, the Cavs also get a 2015 second-round pick in return.

"It was a deal that we worked on for quite some time," Cavaliers GM David Griffin said. "We're very excited about this. It fits our needs."

The Nuggets (15-20) will clear money from their books and pick up a $4.6 million trade exception from the Cavs. The Thunder pick is top-18-protected this year and top-15-protected in each of the following years. The Grizzlies' pick will go to Denver if it falls between picks 6-14 in the next two years and is top-five-protected for two years after that.

"We came into this season expecting to be a playoff team. At this point, we're on the outside looking in," Nuggets general manager Tim Connelly told The Denver Post on Wednesday. "We probably have a couple weeks to change that, be relevant and view ourselves as a playoff-caliber team. I'm hopeful that's the case. But I'm also realistic to know, and honest enough with our team internally, to say: If in a couple weeks, if that's not the case, then we have a new reality.

"It's now or never. The disappointment is real with where we stand. We'll have all we need to know about this present roster within a few weeks."

Mozgov has a strong relationship with Cavs coach David Blatt, who was his coach on the Russian national team when it won a bronze medal in the 2012 Summer Olympics in London. The Cavs' desire to get Mozgov increased after they lost Anderson Varejao for the season to a torn Achilles last month.

"Coach Blatt is extremely excited to have added Timofey, and I think that's something that's a great fit for all of us," Griffin said. "We get up here and we talk about this all the time. We talk about fit, we talk about taking time to grow together. ... His numbers didn't need to be flashy. We've got three guys that are top-20 players in the NBA. Those guys can be flashy. We need guys that do the dirt work."

The Cavs also targeted Mozgov, who is averaging 8.5 points and 7.8 rebounds this season, because he has a favorable team option worth $4.95 million next season.

It has been a busy week for the Cavs, as they have made two deals and acquired three significant rotation players. In addition to Mozgov, they got J.R. Smith and Iman Shumpert from the New York Knicks.

Smith made his debut Wednesday night when the Cavs hosted the Rockets, but Shumpert is out for at least two more weeks with a shoulder injury. Mozgov is expected to join the Cavs on a five-game West Coast trip that begins Friday at Golden State.

"It's something that we need," LeBron James said of the team acquiring Mozgov. "It's something that once Andy went down, it was something obviously we needed to get bigger in the interior and adding a guy like that who can protect the rim, it will help our team as well. So, we'll see. Those are three pieces that can help us, but until we all get healthy and get on the floor together, we won't be able to know."

James missed his sixth straight game with back and knee strains Wednesday, but he may return during the Cavs' upcoming road trip.

In a separate move Wednesday, the Cavs waived guardA.J. Price, who had a nonguaranteed contract.

The move opens a roster spot to add a potential free agent. The Cavs have been one of numerous teams chasing free agent Ray Allen.

Information from ESPN.com's Dave McMenamin contributed to this report.

Stein, Davis: Mozgov Overrated
Marc Stein and Antonio Davis discuss why Timofey Mozgov is overrated but how integral of a part his rim protection will play in the rest of the Cavaliers' season.